Pippa Middleton is writing a tongue-in-cheek guide book on how to party just like her. 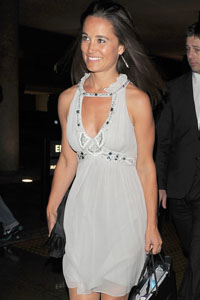 Kate Middleton‘s sister is giving us another reason why we can’t hate her. Pippa Middleton, who is the owner of Great Britain’s most valuable assets, is currently in talks with book publishers to write a how-to guide on partying like a rock star.

According to the Daily Mail, the 28-year-old British socialite is currently in talks with publishers such as HarperCollins and other publishing houses for a book deal that could be potentially worth up to $1.6 million in sales plus other spin-off projects.

The paper reports a publishing source as saying, “Pippa is very serious about the project and has been going to see publishers personally. Pippa hasn’t signed a contract yet but I don’t think it will be far off.”

Book agent David Goodwin is reportedly in talks with Middleton about the book, which some say can help her not only cash in on the sales, but also help raise her profile. She’s recently stepped into the spotlight ever since her sister’s royal wedding back in April. Although Goodwin hasn’t confirmed that he is working with Middleton, he did tell the Daily Mail that “things aren’t at all clear at the moment.”

It seems like Middleton has all the right qualifications to write her own party book, however. Not only does she help her parents run their successful party supply website, Party Pieces, but she’s also one of the United Kingdom’s most famous party gals, having been snapped looking like the life of every party in several photographs released to the media. The fun-loving gal is seen in several of the photographs dressed in different costumes, rolled up in toilet paper in one and is even on the top of a human pyramid in another shot.

When the book does come out though, we wonder if the Queen would add it to her reading list. Heck, we wouldn’t be surprised though if Prince Harry is caught reading the book as well.