Nicolas Sarkozy and Carla Bruni-Sarkozy take a stroll with their baby daughter. 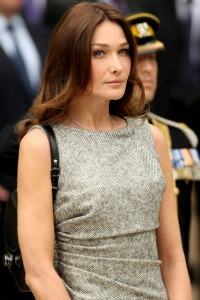 It was not too long ago that new mom Carla Bruni-Sarkozy said that she would do everything in her power to protect her child from the limelight, but it looks like she might already be forgetting that vow due to postpartum memory loss.

The former Victoria’s Secret model and now First Lady of France was spotted strolling with her newborn daughter alongside her husband, French President Nicolas Sarkozy. The couple took an afternoon stroll on Monday afternoon at La Lanterne Park in Versailles, France with some suggesting that either the new mom or the president’s aides had tipped off the local paparazzi for some publicity shots.

Bruni-Sarkozy cradled her 12-day-old daughter while Sarkozy held her arm as they strolled through the park together. According to Britain’s Daily Mail, some commentators say the photo-op was a clear set up as the president is trailing behind in the polls to Socialist presidential candidate Francois Hollande, who is the current favorite to move into the Elysee Palace next May.

It was only last month that Bruni-Sarkozy made statements saying that she would not be exposing her child to the media. “You don’t have a child for the gallery,” the First Lady said in an interview on French television. “I understand the media interest (but) for children it’s not possible.”

Since her hubby might be out of a job soon, it looks like Bruni-Sarkozy has changed her made after all and is making baby Giulia part of the family’s re-election campaign. Step aside Suri Cruise, because it looks like there’s a new celebrity child star in town.