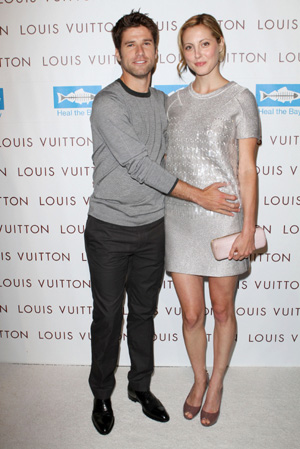 “It’s official: Mrs. Kyle Martino! We are thrilled and have danced our faces off! Here’s to a lifetime, twitterverse!” Amurri, 26, tweeted after the event. Amurri and Martino, who is a former MLS soccer player and current soccer commentator, were engaged last December.

Amurri, who has appeared in The Banger Sisters and Californication as the stripper named Jackie, tied the knot in front of her mother, Susan Sarandon, and father, Italian director Franco Amurri. Sarandon’s longtime boyfriend of 23 years Tim Robbins also attended the wedding, as did designer Chris Benz, who was a groomsman and had his hair dyed bright pink.

Amurri’s dad split with Sarandon when she was very young and has grown up with Robbins since she was 3-years-old. Even though Sarandon and Robbins recently split, the couple hosted the wedding together. The wedding was a weekend full of fun activities, including a scavenger hunt and plenty of cocktails and oysters.

Amurri looked beautiful in a flowing dress with lace details and her bouquet had white and peach flowers. “It was such an honor to be a part of [Amurri] and Kyle’s wedding,” wrote her wedding dress designer, Lela Rose. “Wishing them much love and happiness always.”

“My wife and I are on cloud 9. Wow…my wife!” Tweeted Martino.”That just happened.”

What’s next for the couple? Honeymoon time!

“We are so touched and overwhelmed by all of your congratulations, thank you!! Off to our honeymoon to relaaaax,” she wrote.