History told us the marriage of Kim Kardashian and Kris Humphries was doomed from the start. Take a look at these classic celebrity/sports star relationship flameouts. 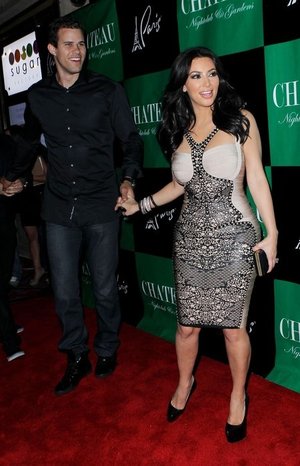 We hope it wasn’t a terribly unpleasant 72 days.

The news that Kim Kardashian and basketball player Kris Humphries are breaking up is a shocker to many,  but not if you’re familiar with the history of celebrity/athlete marriages. They don’t last. On the surface it would seem a perfect match — the beautiful starlet and the hunky jock — but the history of such unions is often not pretty. Here’s our list of the Top 5 celeb-athlete marriage disasters.

Halle Berry has not had good luck with men and her marriage to baseball player David Justice was no exception. The two met at a Hollywood premiere party, married on New Year’s Eve in 1992 and were officially divorced in 1997. Justice wanted out, according to reports. The break-up so shook Berry that she considered suicide, she later told Parade magazine.

This one was doomed from the beginning. How could we tell? Because the groom has a penchant for wearing wedding dresses. Rodman’s agent said the basketball player was drunk during the service, which took place at the Little Chapel of the Flowers in Las Vegas.

Brooke Shields is the former child star known for dating Michael Jackson. Andre Agassi is the tennis players whose motto is “image is everything.” No wonder they lasted only two years. On a positive note, Agassi played some of his best tennis in the first year of the marriage.

This union was one of the most spectacular celeb-jock marriage flameouts in history. On national TV, Givens, with Tyson by her side, said that their life together was “pure hell.” After only eight months together, Givens filed for divorce and Tyson countersued to have the marriage annulled. He said she had trapped him into the marriage by faking a pregnancy. Both of their lives unraveled after the marriage, with Givens’ film career going south and Tyson losing his championship belt and later going to prison for sexual assault.

This is the sad blueprint for most celeb-athlete marriages. DiMaggio, retired early at 36, married the 25-year-old Monroe in 1954. He wanted to settle down. She was intent on living the Hollywood life. “Joe, you’ve never heard such crowd cheering,” said Marilyn, upon returning from a tour of troops in Korea. “Yes I have,” replied Joe. The final straw was the filming of the famous blown dress scene in “The Seven Year Itch.” Before they split, Marilyn made a strange request of good old Joe. If she should die before he did, would he place flowers on her grave each week? DiMaggio did.