Celeb Jihad is feeling the wrath of Taylor Swift’s legal team after implying they have a topless photo of the country music sweetheart. 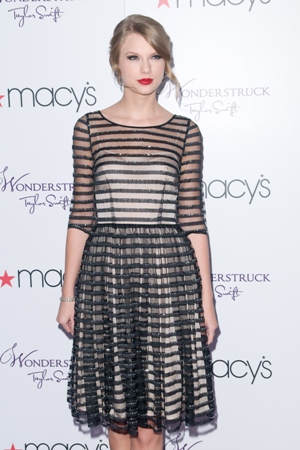 Taylor Swift is doing one better than issuing a denial statement about the nude photo that gossip site Celeb Jihad claims to have of her — she’s threatening to sue!

Celeb Jihad recently posted a photo of a topless woman under the headline, Taylor Swift Topless Private Pic Leaked? The purported photo posted under the suggestive headline does bear some resemblance to the 20-year-old country megastar. But Taylor Swift’s legal team quickly responded with an angry letter.

TMZ reports that the letter alleges the site contains, “false pornographic images and false ‘news'” about the singer, adding that her lawyers are prepared to sue the gossip site for trademark infringement if the photo is not immediately taken down.

SheKnows has reached out to a rep for Taylor Swift on the Celeb Jihad case. A rep for the blog says only that they are considering their options.

The photo in question reportedly shows a Swift look-alike sprawled on a bed sans shirt, but wearing underwear embellished with strawberries. Celeb Jihad has attempted to use the fruity undergarments in their defense as proof that the photo is genuine, writing, “the girl in the photo has strawberries on her panties, and Taylor Swift has been known to eat strawberries.”

As of Monday morning, the site had not removed the story, which sits alongside such hard-hitting items as a “correction” for wrongly reporting that Dave Chappelle had died. The item features a photo of Chris Tucker.

In August, Taylor Swift was the victim of a wardrobe malfunction she blamed on fans. A YouTube video of the incident, watched by over 9 million people, shows the singer wearing full coverage nude — not strawberry printed — undergarments.

Do you believe the nude photo really is of Taylor Swift?

Is suing Celeb Jihad the right thing for Taylor Swift to do?

Taylor Swift to Ellen: “I, for real, don’t have a boyfriend”
Taylor Swift wants to duet with Bruno Mars
Taylor Swift is Billboard’s youngest Woman of the Year