Twilight fever is at an all-time high. A few new clips from Breaking Dawn – Part I have debuted online and they feature Edward, Jacob, Bella and lots of drama!

Vampires, werewolves and babies dominate three new clips from The Twilight Saga: Breaking Dawn – Part I. Summit Entertainment has released a few select scenes from the upcoming sequel just in time for Halloween. 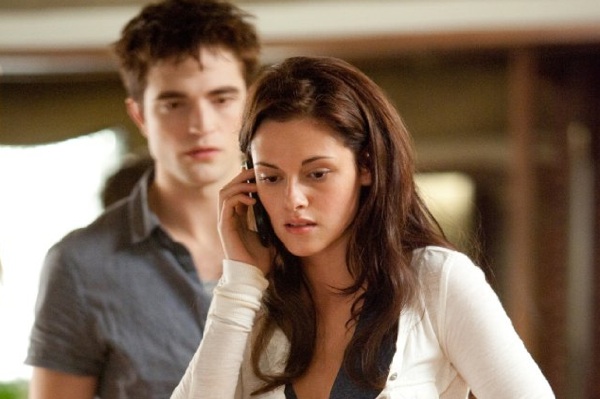 Breaking Dawn – Part I marks the beginning of the end. It’s the first-half of the final entry in the Twilight film series, which plans to go out with a bang! Judging from the following clips Edward, Bella and Jacob’s worlds are about to be turned upside down.

In the first clip entitled, “I’m late” Bella reveals to Edward that she might be with child. She’s uncertain, but realizes that something’s not right with her body. The very thought of having a half-vampire baby frightens Edward to no end. He’s seriously concerned for her health.

t
In clip two, “We need more blood,” Jacob butts heads with Dr. Carlisle and Esme regarding the best way to care for Bella. He’s worried about the danger they’re inflicting on themselves and her. But the vampires have no problem risking their lives for their new daughter-in-law.

t
In the final clip “Sam’s Plan,” The Cullens sit down to discuss the oncoming threat from the werewolves. Jacob warns them that the peace treaty they established in the past is now null and void. They’re out for blood — Bella’s blood!

t
It seems as if the first installment of Breaking Dawn is more Team Jacob than Team Edward. Last week, Summit released a character trailer dedicated to the wolf and all his vengeance. Has Jacob finally stepped out of Edward’s shadow?