Halloween, The World Series and a Northeastern snow storm put a pox on the box office over the last weekend of October, but with the early estimates in, Puss in Boots clearly took out the competition.

An animated Antonio Banderas parried his way to the front of the box office pack in Puss in Boots, this weekend. Paranormal Activity 3 followed, with Justin Timberlake and Amanda Seyfried‘s In Time taking third. Johnny Depp‘s The Rum Diary barely made the top five. 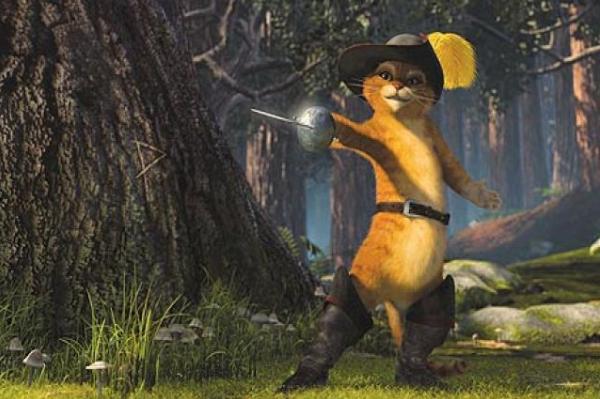 See why Sheknows gave Puss in Boots four paws up >>

Puss in Boots took a hit on the busy holiday weekend, along with the rest of the box office competition, but managed to land a decent opening. The rough weekend could even end up working in Puss in Boots favor. With no other family films dropping this weekend, the computer-animated cat and his crew of pals and foes (voiced by Salma Hayek, Zach Galifianakis, Billy Bob Thornton and Amy Sedaris) could stay on top with a strong second weekend.

Paranormal Activity 3 took a sharp dip that’s likely to continue, but the horror film has so far banked an impressive $81 million domestically, surpassing Paranormal Activity 2. In addition, the low-budget film scared off Real Steel at the international box office this weekend to take the win abroad, for a new worldwide total of $135.5 million.

In Time had a very soft opening, banking only $12 million, in spite of Timberlake’s rocking new History of Rap 3 with Jimmy Fallon. Like Puss, the sci-fi thriller could also boast a better showing next week.

The toughest opening of the weekend was Depp’s The Rum Diary, which barely broke into the top five. In contrast, the faith-based film Courageous continues to hold on, moving back into the top ten after last weekend’s slip.

There could be some shakeups in the top ten once the final tally comes in, with early estimates close around the top five, but the key races are far enough apart to lock in the top three.

Next weekend’s new box office contenders are A Very Harold & Kumar 3D Christmas and Tower Heist. Limited releases include The Last Rites of Joe May, The Son of No One and Five Star Day, while NY/LA releases include The Other F Word, Charlotte Rampling: The Look and Killing Bono.