Once Upon a Time has turned into ratings gold. The fantasy series had another impressive week, outshining those veteran Desperate Housewives and the struggling Pan Am.

ABC has hit pay dirt! The network’s freshman drama Once Upon a Time continues to earn strong ratings after its second airing. Last week, the series’ pilot brought in over 12 million viewers, making it the highest-rated scripted show of the night. 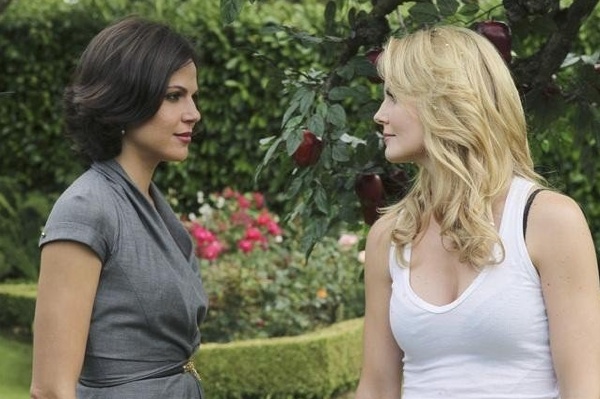 This Sunday’s episode entitled, “The Thing You Love Most,” attracted over 11 million viewers, maintaining almost all of the show’s premiere audience. That’s quite a feat considering the competition from the other major networks. Fox aired their annual “Treehouse of Horror” episode of The Simpsons, which brought in 8 million viewers, while NBC scored big with 20 million thanks to Sunday Night Football.

CBS aired the highly anticipated episode of 60 Minutes, which featured an interview with Bernie Madoff’s family. According to Entertainment Weekly, the network’s Sunday estimates are “off kilter” due to a late-running football game that delayed its schedule. But the show is expected to have earned strong numbers for its timeslot.

During this week’s episode of Once Upon a Time, the drama continued to build with the mounting tension between Storybrooke newcomer Emma Swan (Jennifer Morrison) and Mayor Regina Mills (Lana Parrilla). The show also featured a guest appearance from True Blood star Kristin Bauer van Straten, who stepped into the fabled shoes of Maleficent from Sleeping Beauty.

Overall, Once Upon a Time continues to prove that family-oriented shows still have a place in primetime. For the second week in a row, the series outperformed its ABC cohorts Desperate Housewives and Pan Am. Housewives, which is in its final season brought in 9 million viewers, while Pan Am earned over 5 million. Both shows are on par with their previous week’s numbers, but Pan Am is floating in the danger zone. If its ratings don’t rise, it could meet an early cancellation.

Once Upon a Time airs Sundays on ABC.