Bethenny Frankel revealed to SheKnows that baby Bryn ain’t ‘fraid of no ghosts! 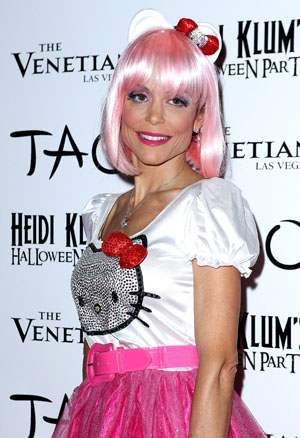 “There were tons of costumes on the show,” Frankel told SheKnows Friday after she taped Ellen DeGeneres’ Halloween show, scheduled for air Monday. Frankel went on to detail a few of the stars that people dressed up as: “Liberace, Nicki Minaj… just everyone. Elaborate costumes.”

Bryn wasn’t fazed by the costumes.

“Ellen scared the absolute crap out of me,” Frankel said. “You’ll see why on the show.”

The former Real Housewives of New York star was on the show to promote yet another yummy-sounding drink in her Skinnygirl line: the white cranberry cosmo.

Frankel didn’t exactly give away her Halloween costume, though she told us it was inspired by her life and Bryn. She wore a neon pink, Hello Kitty-inspired costume to Heidi Klum‘s 12th Annual Halloween Party at the Tao Nightclub at The Venetian Resort on Saturday night.

As for Bryn? Well, the healthy foods chef isn’t exactly sure what her daughter will be for the spooky holiday. “Her bumblebee costume didn’t come in time,” Frankel lamented.

She’s not too keen on giving her a ton of candy, either.

“We’ll probably just put a costume on her and give her some candy,” Frankel revealed. Bryn’s favorite? “She likes black licorice.”

Hopefully Bravo’s cameras will pick up on all of Bethenny and company’s Halloween plans — the reality star revealed she’s still filming the third season of the popular Bethenny Ever After.

“It’s a long filming process, like five to six months,” she said. Earlier reports indicated that the new season would hit in December, though Frankel says that’s not the case.

“It’ll be into the new year before it airs,” she said.

Are you looking forward to seeing more of Bethenny, Jason and Bryn in Bethenny Ever After?