Glee returns with an all-new episode this week — “Pot O’ Gold.” You don’t want to miss the debut of The Glee Project winner, Damian McGinty!

Gleeks rejoice! Glee is back with an all-new episode that has Brittany befriending a leprechaun. Wait, what? 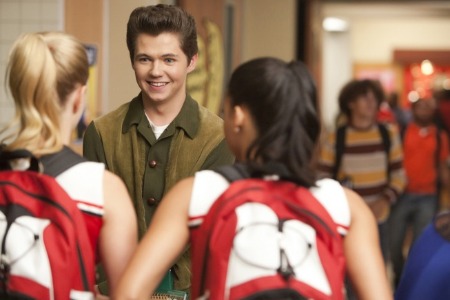 Glee is returning tonight (Tuesday, Nov. 1) and after a long hiatus brought on by baseball and The X Factor, we’re ready!

We recently brought you a few pictures from “Pot O’ Gold” featuring Damian McGinty in his new role and we have to say it one more time — we’re loving his pompadour hair!

In the new episode, Damian shows up as Rory, a foreign exchange student that takes a shine to Brittany. But wait, there’s more. Brittany thinks he’s a leprechaun! You have to love Glee and their silly ways. We’ll also get more Sue Sylvester and her campaign, plus Mercedes’ plight to recruit more members to Shelby’s club.

Are you excited for the debut of Damian McGinty on Glee? How about his connection to Brittany? It looks like he could be one slushie away from being a member of New Directions, so may the luck of the Irish be with him!

Read On For More Glee

Chord Overstreet back on Glee