Melissa McCarthy may be starting a plus-size clothing line, but that doesn’t mean the Mike and Molly star doesn’t still imagine being a smaller size. 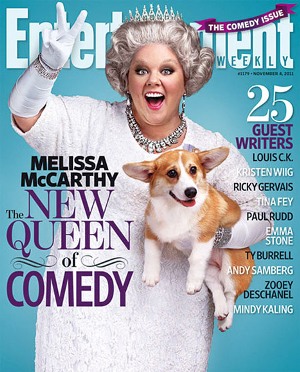 Melissa McCarthy is fast becoming a recognizable face, name and body. Yet the plus-size advocate has now admitted to Entertainment Weekly that she’s been known to dream of being “emaciated” — in a positive light.

Responding to the controversy Melissa McCarthy commented, “My first thought was, ‘Gosh, I hope she doesn’t have a daughter.’ And then after a second I thought, ‘What a sad, troubled person. You’re making such a [expletive] judgment on people.'”

The 41-year-old actress continues talking body image by saying, “Do I sometimes hope I wake up in the morning and people are like, ‘What’s wrong with her? She looks emaciated.’ Of course I would love that. I’m such a clothes whore I would love the opportunity to be a hanger. But I think I’m more confident than I’ve ever felt in my life. I always thought it was worth the fight. Now I know it is.”

Melissa McCarthy, who came to tears during her Entertainment Weekly interview, is proud to cover the magazine’s comedy issue. “Comedy to me is all about the bumps and bruises and weird tics,” she shared. “It’s everything you find out about somebody when you fall in love with them that on paper is really creepy but you find adorable.”

Are you surprised to hear of Melissa McCarthy’s size 0 dreams?