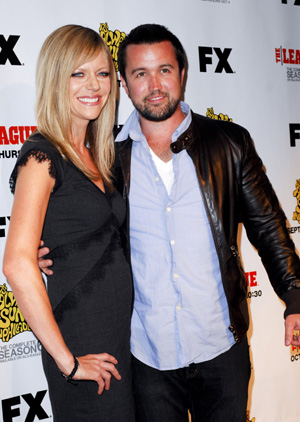 Kaitlin Olson and Rob McElhenney are wasting no time in expanding their family, as the It’s Always Sunny in Philadelphia stars have announced they are pregnant again and due this spring.

Their second child, also a boy, will join Axel Lee who turned one just last month. Olson, 36, shared the news in a statement, saying, “We’re having a boy! We’re so happy that Axel gets to have a brother so close in age. And that I get to add another set of balls to my very, very male world.”

She went on to joke, “We found out I was pregnant during my mom’s birthday weekend in Ojai. I was instantly so proud of this baby for already knowing how to make someone else’s special day all about him.”

The couple, married since 2008, are not the only It’s Always Sunny stars to be expanding their family. Charlie Day and Mary Elizabeth Ellis are pregnant with their first child and Glenn Howerton and his wife just welcomed their first child last month. There must be something in the water!

Howerton, who named his son Miles, joked about finding the perfect baby name for his son. “My wife and I thought it would be a good idea to wait to see the baby first before we actually decided what his name would be … get a sense of the guy,” he said during an appearance on Conan O’Brien’s show. “Then we saw him and he looked like a tiny little baby alien grandpa creature and I was like, ‘I’m not getting any information from this at all.'”

The FX hit comedy is in its seventh season and has been renewed for the next two seasons.