Justin Bieber’s voice is markedly different on his upcoming Christmas album, and his rep very bluntly reveals the reason why. 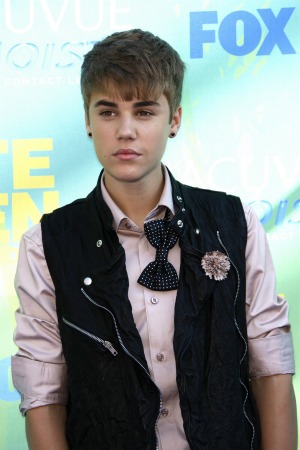 On Justin Bieber’s upcoming Christmas album, Under the Mistletoe, fans are going to be treated to a different sounding Biebs — his voice is decidedly smoother and deeper. His manager has no qualms about telling us exactly why.

Selena Gomez will be happy to hear that. While change was inevitable — puberty hits everyone sooner or later — the president of Bieber’s record company had a more palatable explanation.

“The album really shows his growth as a young man, and his voice has just blossomed,” said Island Def Jam Music Group head Steve Bartels. “It will pleasantly surprise many people. It’s not your typical holiday album.”

The new foray into manhood did not bode well for every song on the album, however. His much heralded duet with Mariah Carey on a remake of her splash hit “All I Want for Christmas is You” came with a catch: He had to sing it in her original key.

“That was the hardest song to do,” Braun said. “A year ago that would have been no problem.”

“Yes, that was high,” Bieber says. “But I grinded it out and we got it down.”

“These songs show he really can do anything he wants: He’s rapping on one, singing a classic on another, R&B, country, pop,” Braun says. “I hope people will hear it and say, ‘He’s not going anywhere.'”

“All the hype and the kids running down the street screaming, you lose the chance to say that this started because of the music. This album lets the music speak for itself,” Braun said. “I don’t want to draw comparisons, but there was a band during the British Invasion that had girls screaming at them. I think you know who I’m talking about.”