Daughtry lead singer Chris Daughtry will sing the national anthem at Game 7 of the World Series. 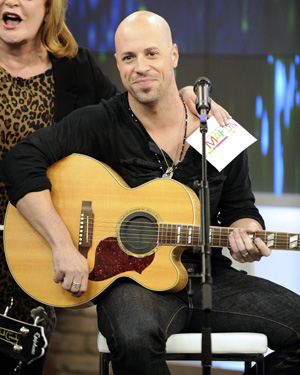 “So I’ll be singin’ the anthem at game 7 tomorrow,” Daughtry tweeted. “See ya’ there!”

Daughtry was on season five of American Idol, and after being voted off, went on to have a triple-platinum album in 2006 with his band Daughtry.

Other celebrities who have sung the national anthem in this series include Trace Adkins, Ronnie Dunn, actress Zooey Deschanel and American Idol winner Scotty McCreery.

The New Girl actress Deschanel also performs in the Indie pop group She & Him and has also showed off her vocal talents in her movies 500 Days of Summer and Elf.

Daughtry will hopefully have better luck during his performance than McCreery, who flubbed up the lyrics and then had to re-start the song after his microphone wasn’t working properly. The national anthem is notoriously difficult to sing and McCreery joins a list of established singers who have flubbed it up, including Christina Aguilera, Cyndi Lauper and Steven Tyler.

Will Daughtry be rooting for the Rangers or the Cardinals? Judging by his Twitter feed, he is a Cardinals fan. “Just rolled up in the Cardinals stadium,” he tweeted and included a photo of Busch stadium. “C’mon St. Louis!!!”

He later tweeted his excitement after the Cards narrowly escaped being beaten by the Rangers to pull out a win 10 to 9.

“I can’t believe what I just witnessed!” he wrote after the game last night. “Cards win it!!!”