It’s official: The firstborn daughter of Prince William and Kate Middleton could be Queen of England, now that the centuries-old laws of succession have been changed. 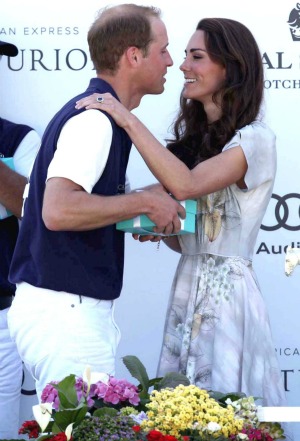 Traditionally, if Prince William and Kate Middleton had a baby girl as their firstborn, she would be pushed aside in the line of succession in favor of any younger brothers. Now royalty has caught up with modern times, and female children are in the direct line of succession — meaning that if Will and Kate have a girl first, she will be Queen!

The agreement to change the line of succession came after the 16 countries of the British realm agreed to the changes suggested by Prime Minister David Cameron, with the blessing of Queen Elizabeth.

In addition to changing the rules of succession, a rule barring anyone in line for the throne from marrying a Roman Catholic was abolished.

“The idea that a younger son should become monarch instead of an elder daughter simply because he is a man, or that a future monarch can marry someone of any faith except a Catholic; this way of thinking is at odds with the modern countries that we’ve all become,” Cameron told reporters.

“Put simply, if the Duke and Duchess of Cambridge were to have a little girl, that girl would one day be our queen.”

Queen Elizabeth presided over the agreement at a Commonwealth summit held in Perth, Australia. SheKnows reported that the change in the rules of succession was in the works earlier this month.

Kate Middleton converted from Catholicism to the Church of England prior to her April marriage. The 300-year-old rule was designed to protect a Protestant monarchy during a time of huge religious and political upheaval.

These changes will not affect the current generation of royals, so the Princess Royal — Princess Anne — remains tenth in line to the throne.