The nursery of Sandra Bullock’s son isn’t adorned with cutesy animals or the alphabet — baby Louis has a Warhol! 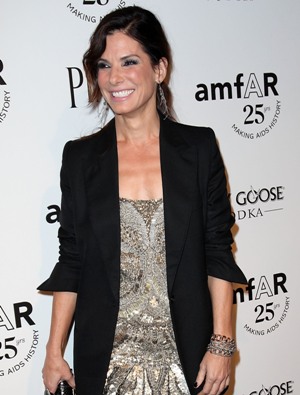 Sandra Bullock’s baby Louis can now add “art collector” to his itty-bitty resume. The adopted son of the actress has been given his very own Andy Warhol painting!

Sandra Bullock, pictured here at Thursday’s amfAR Inspiration Gala at the Chateau Marmont in L.A., is the lucky recipient of her agents’ generosity. At an auction benefiting amfAR AIDS research, a bid of $14,000 won Andy Warhol’s “Peaches” print for her 1-year-old son Louis.

Check out a photo of Sandra Bullock and son Louis in pirate gear below!

“I want to thank Kevin Huvane and Bryan Lourd for not being cheap [expletive] and gifting my son with his first Warhol,” Sandra Bullock joked. The actress, who remains adamant that she and Ryan Reynolds are nothing more than friends, was photographed entering the event solo.

The event honored the late Elizabeth Taylor, who helped create amfAR in 1985. Speaking of the icon who passed away in March, Bullock shared, “Earlier this year, the world lost a radiant woman of courage and compassion. She lives on in every person she touched. She never thought twice to put her arm around someone who was suffering, and that is the gift we have as human beings, the ability to reach out and touch another human being. Tonight we can honor this extraordinary woman and finish what she started.”

Sandra Bullock, the mother of quite possibly the world’s youngest owner of an Andy Warhol painting, became mom to Louis through adoption in 2010. The pair is pictured here, dressed in pirate gear after attending a themed birthday party in early October. 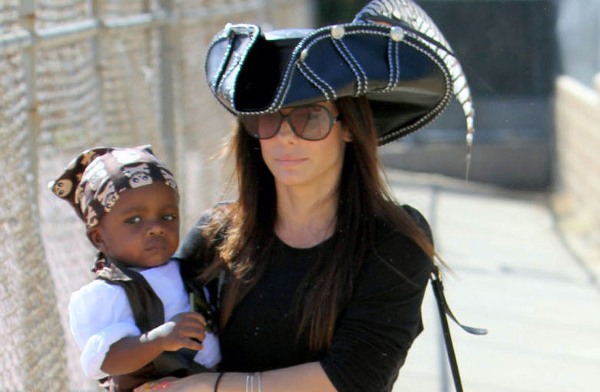 Do you think Sandra Bullock’s son owning an Andy Warhol painting is over the top?