Madonna and Lourdes Leon talk about their fashion girl problems in a new video. Plus, find out how you can become the new face of Material Girl!

Madonna and her daughter, Lourdes Leon, are looking for the new face of their Material Girl clothing line — and they’re letting us in on their struggle in a new video. 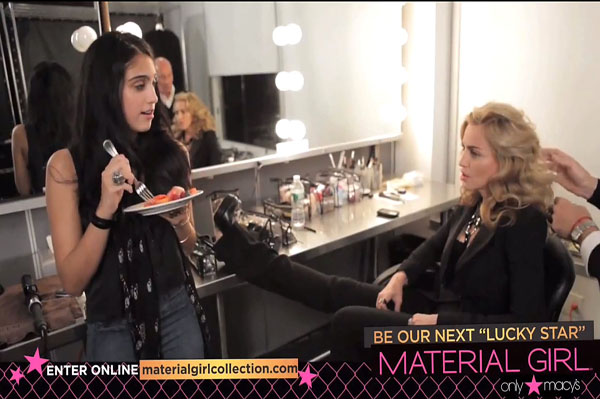 Open casting calls are being held in several cities, including New York City, Miami, San Francisco and Los Angeles to find a fresh new face to model the trendy teen clothes. Maybe they’re looking for you!

Can’t make it to one of the open casting calls? You can also “audition” online!

In the video, Madonna expresses her concern that they’ll get the wrong kind of applicants for the new spokesmodel position — after all, her ’80s “Material Girl” reputation was supposed to be ironic and tongue-in-cheek, according to her.

“People think I’m a superficial person,” Madonna laments. “I’m not. I love horses… I love flowers — I don’t love hydrangeas.” We all know what happens when you give Madonna hydrangeas.

For her part, Lola reacts in typical teenager fashion — she’s laid back and more interested in her fruit than her mom’s worries. Our favorite exchange?

“People don’t say that anymore,” her daughter snaps back. Ouch! It must hurt Madonna to know she’s not the one up on all the trends anymore.

Sure, the video shows off the acting skills — or lack thereof — of Madonna. Lourdes, on the other hand, is a natural in front of the camera. We actually think she should probably be the face of Material Girl… again.

Don’t worry, it looks like current Material Girl Kelly Osbourne is still repping the line, in addition to whomever they choose as the new face of Material Girl. Lola recently sat down with Osbourne to find out who she thinks has the best style — Kelly thinks Rihanna has the most fierce style of any starlet.

“Rihanna is FIERCE. She’ll try out any look…she is definitely a Material Girl!” Osbourne told Lourdes for the official Material Girl blog.

It looks like the next Material Girl has some pretty big shoes to fill.

10 hrs ago
by Rosalind Moran