PETA wants Lady Gaga to throw out that meat dress and go with something a little more animal-friendly. 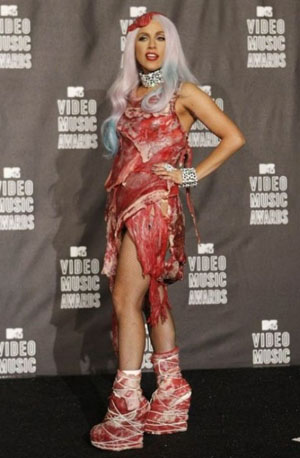 Lady Gaga is known for making waves with her outfits, but her most recognizable outfit to-date is the meat dress and steak beret she wore to the 2010 MTV VMAs. PETA isn’t too happy that the Lady known as Gaga is aligned so closely with slaughtered animals — and they want to help her change her image.

“As Lady Gaga heads to India to perform at the Formula One closing party, PETA India has an idea for her next statement outfit: a dress made of lettuce leaves,” the animals rights organization wrote on their website.

“Considering meat’s monstrous impact on our health and the environment as well as the plight of animals who are dismembered for food while still conscious, PETA India asked Mother Monster to show her fans that even just reducing the amount of meat they eat (or wear) can help,” PETA added.

Good luck with that — another organization wanted Lady Gaga to wear BBQ ribs to the 2011 MTV VMAs, but she didn’t answer. Gaga is fashion-forward and wearable food was so 2010.

Still, PETA had to ask — closed mouths don’t get fed.

“If she agrees, we’ll make her a dress entirely of lettuce and held together by pins and threads,” spokesperson Sachin Bangera said in a statement.

“It’ll be a full length gown, and we’ll make sure it looks sexy…someone will be on hand to spray the lettuce with water so that it doesn’t wilt.”

Stay tuned… maybe human lettuce wraps will be the new trend for Spring 2012.