Usher loves Halloween… maybe a little too much. He was so excited for a Halloween event that he parked in a handicapped spot and one woman was not happy about it. 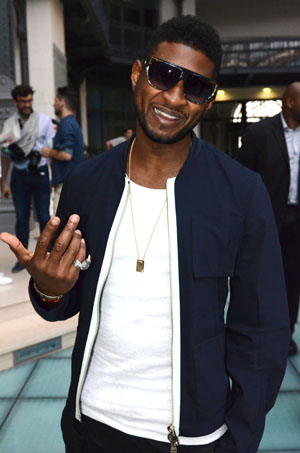 At least one person in Atlanta isn’t an Usher fan — and she’s not afraid to let him know it! The woman was videotaped screaming at the R&B star for parking in a handicapped spot without a permit.

Luckily, Elvis — or a man in an Elvis costume, we’re not sure — stepped in to hold the irate woman back.

“Usher had just arrived to a shopping center near the Little 5 Points Halloween Parade (hence the guy in the Elvis costume) when the woman saw U’s SUV parked in a handicap spot,” TMZ wrote on their site.

Usher is taped arguing back with the woman, though it’s not clear what he’s saying. We’ve contacted his rep to get his side of the story.

Despite the setback, it looks like Usher really loves Halloween.

“Count down to the Halloween party at my house tomorrow!! Gonna be Epic!! I’m such a big kid man! URIV,” he tweeted last weekend. He even took the time to visit his sons’ preschool class — he even admitted that they make him nervous!

“I face one of the harder crowds tomorrow….I’m actually nervous, and I don’t get that way too often,” he wrote before the visit. It turns out that everything went well.

“I sometime forget how long I’ve been standing in front of audiences. Lol…:-) all good. I WAS A HIT!!! They loved me! Especially two of em!” he added, along with several pictures of the class decorating pumpkins.

“Two classes, with story reading, and face paintings, and I carving, clean and lit the candle….I DO THIS!!” he added of what they did during his visit. “I make time cause I love them…thank my grandparents!!…and of course my girl Momma Martha.”

Read on for more Usher

Usher wants Pippa Middleton in his underwear
Will there be an Usher sex tape?
Usher appears on Extreme Makeover: Home Edition