The Night of Illumination brought out characters from Mystic Falls’ past on The Vampire Diaries this week. Read on to see which ghostly spirits haunted Mystic Falls, what Mason had in store for Damon and which beloved, dead character tried to help Stefan.

Ghosts ran amok in the town of Mystic Falls this week on The Vampire Diaries, but they weren’t all there to torture Damon — some were there to help. Read on to see which ones… 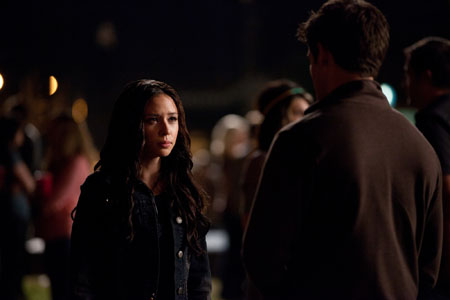 The Night of Illumination conjured up a few spirits on The Vampire Diaries this week, and while Klaus (Joseph Morgan) hasn’t returned and Mikael (Sebastian Roche) is still a mystery, we can say this about “Ghost World” and what went down — Mason, Grams, Anna and Lexi, oh my!

After Damon got the ghostly smack down from Mason in the opening, he warned Bonnie about fixing what she did wrong during her spell that sent Vicki back to the other side.

Damon (Ian Somerhalder) wasn’t the only one who wanted to contact the dead! Elena (Nina Dobrev) asked Jeremy (Steven R. McQueen) to reach out to Lexi via Anna to help Stefan (Paul Wesley). 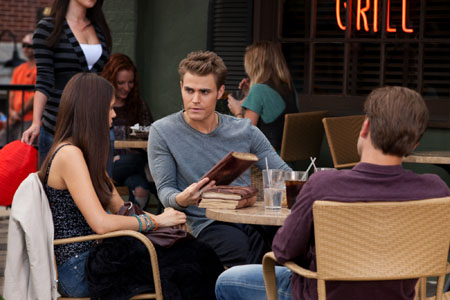 Bonnie (Kat Graham) and Caroline took a field trip to the place where she brought Jeremy back to life — you know, the land where the 100 dead witches were originally sacrificed. The plan? To do some witchy voodoo.

Get the scoop on what went down last week on TVD >>

As the walls began to rumble and the candles began to sway, four huge things happened: Elena walked in on Jeremy and Anna just as they kissed and she could see Anna. Grams appeared in front of Bonnie and Caroline, also visible. Damon and Ric (Matt Davis) could see Mason. And here’s the best part — Lexi came to Stefan — the one person who could always help him.

Grams reminded Bonnie that there were consequences to bringing Jeremy back to life and she cracked open a door for ghosts to return to complete unfinished business.

The only way to fix things was for Bonnie to get Elena’s necklace and destroy it — that damn necklace is always the key to everything.

TVD: The Ghosts And Their Missions

Lexi, with Elena’s help, began by starving Stefan of blood and then making him feel pain — the purpose was to make him want to be saved. It was too much for Elena and she bolted.

Mason wanted an apology from Damon and after he got it, he led him to the old Lockwood cellar where he swore there was a weapon to kill Klaus.

As Damon walked through the cellar, a bunch of stake-esque weapons came out of the walls and pinned him. 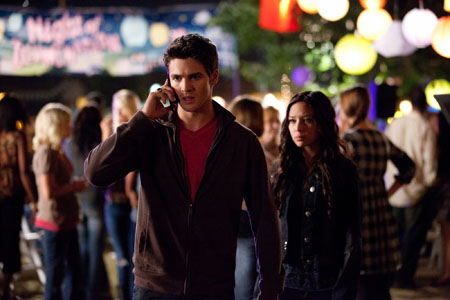 Meanwhile, Caroline couldn’t find the necklace and after Elena tried to plead with Jeremy that Anna had it — surprise she did. Neither Jeremy or Anna wanted to let go of their connection by destroying the necklace.

These weren’t the only ghosts that hit up Mystic Falls thanks to Bonnie and her consequences. Remember the band of tomb vampires who went against Pearl and tortured Stefan all those episodes ago?

They made a huge entrance at the Night of Illumination.

As the Night of Illumination got underway, the tomb vamps staked a dead guy to the tree and that was just the beginning.

Meanwhile, Mason helped Damon out of his little stake predicament. Mason doesn’t want revenge — “he wants redemption” in the form of helping Tyler. After Damon got stuck again, Mason had to go on without him to find the weapon. 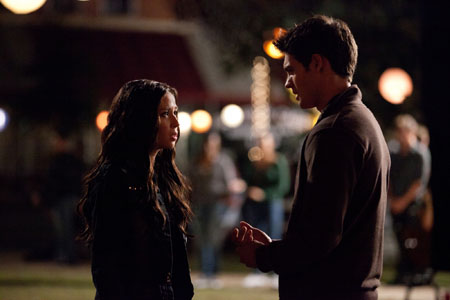 As Bonnie and Caroline were about to leave to meet Jeremy with the necklace — which he agreed to give up after convincing Anna she wouldn’t be alone anymore — Caroline (Candice Accola) noticed the tomb vamp leader heading straight for Mrs. Lockwood.

Time was running out for Lexi to help Stefan, and she pleaded with him to remember the necklace and its hope.

The necklace finally made its way to Bonnie and Grams, and just as easy as all the ghosts came, they went — not able to finish what they started.

Mason couldn’t tell Damon where the weapon was, Lexi couldn’t break through to Stefan and the tomb vamps couldn’t kill Mrs. Lockwood or any other founding family members.

Unfortunately, it also set off Bonnie’s anger towards Jeremy.

The one beautiful moment that did happen was Anna was reunited with Pearl, her mother.

It wouldn’t be The Vampire Diaries without a killer ending! As Bonnie wallowed over Jeremy’s betrayal of kissing Anna, the necklace re-appeared and Alaric found what Mason had been looking for — a Viking scroll of the Original vampires and their names.

Well, we didn’t know that’s what it was until they showed it in next week’s preview, but still, it’s an insanely-amazing setup for the next episode, which will introduce us to the history of the Originals.

It was so nice of Ric to help Damon finish what Mason couldn’t. What did you think of this week’s episode of The Vampire Diaries?