Giulia Bruni-Sarkozy is already being spoiled with lavish gifts even though she’s only a week old! 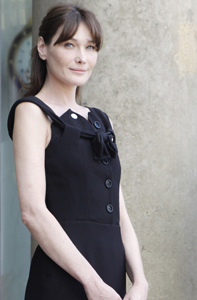 French President Nicolas Sarkozy and First Lady Carla Bruni-Sarkozy‘s newborn baby girl has already been given the royal treatment by being showered with gifts from international leaders, royals, and dignitaries.

According to the European press, some of Giulia’s father’s high-profile friends and allies have been sending gifts to Europe’s most talked-about baby girl.

German chancellor Angela Merkel was photographed at the euro talks in Brussels, Belgium presenting President Sarkozy with a Steiff Schlaf-Gut-Bar, which translates to “Sleep-Well-Bear,” and is made by a popular German firm’s baby collection. Britain’s Prime Minister David Cameron also handed Sarkozy with a pink woolen Witney blanket during the talks as well.

The French media also reports that Morocco’s King Mohammed VI sent a basket of white orchids to the hospital for baby Giulia and her mother while France’s former first lady Bernadette Chirac sent the newborn a smoke-colored robe from Baby Dior with a handwritten note from former French president Jacques Chirac.

Bruni-Sarkozy had earlier stated that she would do everything possible to protect her child from the media and that she did not plan on exposing her baby to the public. It was only in July that she finally confirmed France’s worst-kept secret that she was pregnant, and just last month she stirred controversy when she said she was craving cigarettes and alcohol. She said, “Quite frankly, I can’t stand it any more. I spend most of my time either sitting down or lying down. I can’t drink or smoke anymore. I’m in a hurry to get it over with.”

This is the second child for Bruni-Sarkozy, who also has a 10-year-old son, Aurelien, with ex-boyfriend Raphael Enthoven.