20 years after the release of Nirvana’s iconic album Nevermind, Kurt Cobain’s greatest legacy — his little girl Frances Bean Cobain — is all grown up and getting married. 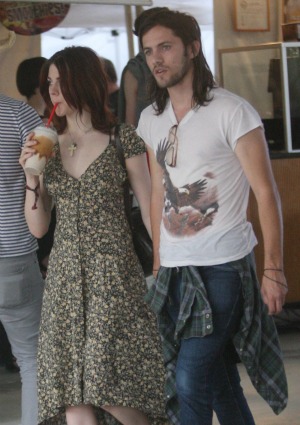 Get ready for another royal wedding — but this time, it’s rock royalty. Frances Bean Cobain is engaged to musician Isaiah Silva, according to sources close to the couple.

The rumor started with the couple themselves. The pair changed their Facebook statuses to “engaged” a few weeks ago — but just as quickly changed it back. (They go by the fake names of Frances Rachel Leigh Cook and Isaiah David Berkowitz-Cusack on the site.)

Of course, that didn’t stop them from being all cutesy about it in their posts. In one, Cobain wrote, “Getting to spend the rest of my life loving my best friend makes me the luckiest woman in the world.”

In another, Silva wrote, “…I do what I can. And by do what I can I mean not shower and steal cloths from my fiancée and the good will [sic]”.

A source confirmed their engagement to People, but so far no reps are forthcoming with any information.

The move could explain why Cobain recently dropped $1.8 million on a new home just minutes from the Sunset Strip in Los Angeles — the perfect love nest for newlyweds!

The big question is, will Cobain’s estranged mom Courtney Love be invited to the wedding?

Frances Bean Cobain is currently a student at the ultra-exclusive, very expensive, private Bard College in upstate New York. She made her media debut at the 10th annual MTV Video Music Awards in 1993 at just 13 months old, carried in her mother’s arms while her dad balanced her bottle and toys.