A 911 tape from earlier this month reveals that NFL receiver Terrell Owens might have tried to take his own life. 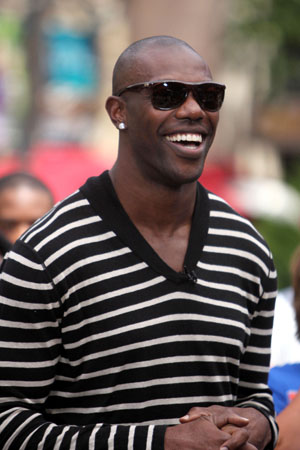 NFL star Terrell Owens reportedly tried to end his own life on Oct. 6, according to a 911 tape released on TMZ. Owens’ assistant called emergency personnel after he downed prescription painkillers.

“Was this a suicide attempt?” the 911 dispatcher asked the assistant.

“Yes, I believe so,” she responded, adding that he had been “talking to his girlfriend, ex-girlfriend … [I]don’t really know what you wanna call it.”

Owens was also hospitalized in 2006 for the same reason, according to TMZ. He downed 35 Vicodin pills during that time — a report he vehemently denied. “The rumor of me taking 35 pills, I think is absurd. I don’t think I would be here if I had taken 35 pills,” Owens said after the incident.

“Terrell has 25 million reasons to be alive,” his agent added at the time, referring to Owens’ $25 million contract at the time with the NFL’s Dallas Cowboys.

We’ve reached out to the receiver’s rep to get more on this story.

Owens’ football career was stalled this year with a knee injury. He held a televised workout earlier this week to show prospective teams that he’s ready and willing to contribute to a team.

“I only need one team,” Owens told the NFL Network earlier this week. He did get an offer — from a Chicago Arena Football team.

“We feel that this is an ideal time to approach the future NFL Hall of Famer,” Chicago Rush GM and president Gene Nudo said in a statement. “It would be a fantastic honor to add Terrell to our current roster for the 2012 season.”

Owens’ potential paycheck as a member of the Rush? $400 a week.

He probably won’t be taking the offer, though. “That is absurd,” his agent said after the offer was announced.

Do you think Terrell Owens tried to kill himself?