Word emerged this week that Chelsea Clinton is considering a run for Congress. Is she following in her parents political footsteps? 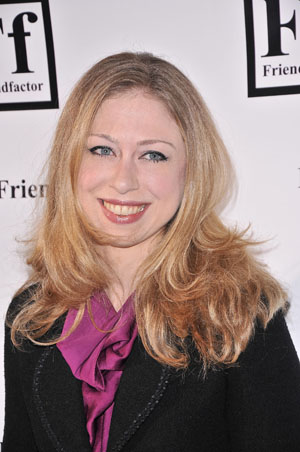 Chelsea Clinton grew up in a political household — her father, Bill Clinton, was the President of the United States for most of her teenage years, after all. Clinton struck out on her own path by pursuing education in public health and policy. However, political watchers are whispering about the youngest Clinton’s possible foray into the family business.

New York blog Talk of the Sound reported Wednesday that the still-newlywed woman had been approached “by the right people” in the state’s democratic party to pursue a congressional seat in the state’s 18th district.

“The plan is to identify an open seat for Clinton in or around New York City where she currently resides with her husband, Marc Mezvinsky,” the blog wrote. “While no specific district has been determined, New York City and Westchester are said to be the focus with New York’s 18th District considered a strong possibility. The 18th encompasses much of Westchester County, just south of where her parents have maintained a home for the past 12 years.”

However, Clinton’s camp stomped on the rumor.

“This is 100 percent false. She’s not running for Congress in the 18th District or any other,” spokesman Matt McKenna told the New York Daily News.

Clinton currently works in a global financial firm in New York City and focuses her philanthropic efforts on public health and women’s issues, much like her mother, Secretary of State Hilary Clinton.

Does that mean she’s never run for office? Well, she’s young — there’s still plenty of time for it and we’re sure her parents would support it.

“My parents always asked me what I thought, listened to my opinions, articulated their diagnoses of our challenges at home and abroad, and shared their ideas for how to build a more equal and prosperous country,” Clinton wrote in a Daily Beast article earlier this year. “I always felt part of their call to serve…”

Do you think Chelsea Clinton should get into politics?