Jessica Biel and Justin Timberlake aren’t shy about appearing in public together.

Well, it looks like this may be the end of the “are they or aren’t they” debate about Justin Timberlake and Jessica Biel‘s relationship status — if this cozy photo is any indication of their romance status. The longtime twosome broke up last year, though they’ve been spotted together several times over the past few months. 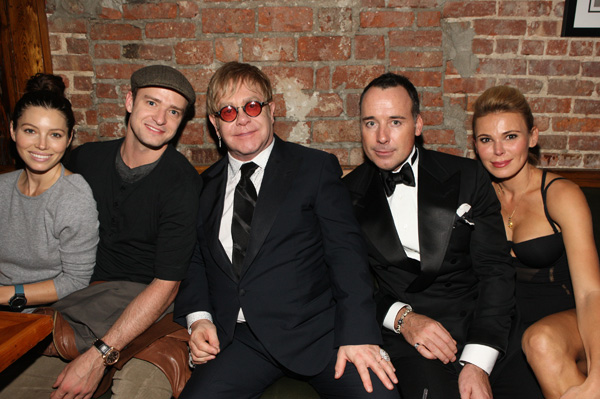 Biel and Timberlake met up with Elton John and his husband David Furnish during Southern Hospitality’s “One Night Only” BBQ hosted by Neuro. The show also featured a performance by One Republic. The two appeared quite close and comfortable together in the photo, leaving us pretty confident that they’re giving the relationship another go.

They’ve been together on both coasts during recent weeks — Biel joined Timberlake at a private party in Beverly Hills after the premiere of his new film with Amanda Seyfried, In Time.

“Jess didn’t show up until the after-party,” a source told US Weekly of the 29-year-old Biel. “They still look really in love, though… such a cute couple.”

Rumblings of a re-coupling started back in August with a source telling SheKnows that the two were getting back together, but that they “are more wrong than they are right.”

However, Timberlake obviously still had feelings for his ex.

“She is single-handedly the most significant person in my life,” he told Vanity Fair during the summer. “In my 30 years, she is the most special person, OK? I just don’t want to say much more, because I have to protect things that are dear to me. For instance, her.”

Perhaps he found out the grass wasn’t greener on the other side? He reportedly had flings with Olivia Munn and Olivia Wilde.

“They have been talking the whole time and decided to give it another shot,” a pal told US Weekly. “Jessica really wanted to get back together with him and Justin realized single life is not what it’s cracked up to be.”

Do you like Justin Timberlake and Jessica Biel together?