Dancing With the Stars judge Carrie Ann Inaba should star in one of those eHarmony commercials: she met her fiance on the site!

You know those eHarmony commercials that are on television all the time? You’ve probably wondered if those testimonials are from real couples or actors… so have we. Well, we can’t tell you about those couples, but Dancing With the Stars judge Carrie Ann Inaba will tell you that the website really does work: She met her fiancé on the site! 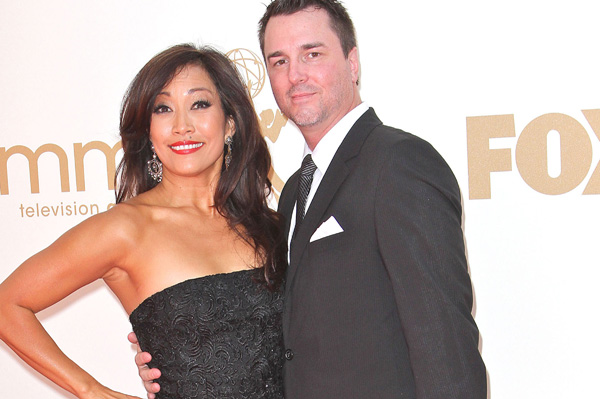 “I didn’t put anything about really, who I was,” Inaba told Access Hollywood of her online dating profile. “I really put exactly what I wanted — I put, ‘I love cats.’ I’m crazy, crazy cat lady. He took a risk.”

Her fiancé, Jesse Sloan, proposed to the gorgeous judge while she co-hosted Live! With Regis and Kelly earlier this year. He might not have known who she was by her initial profile, but he did once she sent a picture.

“About a few months into it, I finally sent a picture of me in Hawaii, no makeup on, one of those cell phone (photos),” she remembered. “And he’s like, ‘Oh, I have bad news. I know who you are.’ And I was like, ‘Oh. Awkward.’ And he goes, ‘It’s okay, I’m not going to tell anybody. I think we’re having a really great conversation here and it’s growing. Can we meet?'”

The pair’s first date was a supervised visit at a friend’s house. Now, they’re planning a wedding, despite Inaba’s lack of wedding planning skills.

“I suck,” Inaba said. “I don’t want to plan. What do I do? The engagement was already publicized. I’m doing (the wedding) private. I want to do backyard and I want to do beach. But if I go to Hawaii and do the beach, then I have to leave my cats, because you know I’m a crazy cat lady. We have four. We’re going to get more.”

They’re planning for more than cats in the future.

“(We’re) trying for a baby,” Inaba revealed. “Absolutely. Whichever comes first is fine. We don’t have to be married to have the baby. At my age, I’m 43, I sort of have to get moving on the baby. The wedding can come later.”

Have you — or has someone you know — met a mate on eHarmony?