Kate Middleton has carried out her first solo public engagement, standing in for the Prince of Wales. 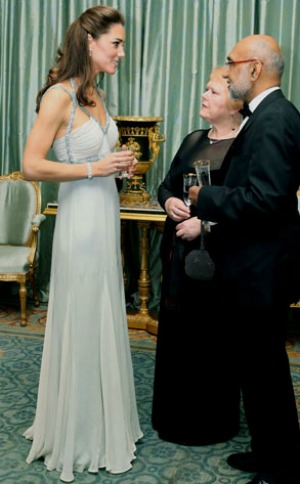 We do all sorts of favors for family, but when you’re royalty it takes it to a whole new level. Kate Middleton did a solid for her father-in-law Wednesday night, standing in for the Prince of Wales at a charity dinner when he was called away at the last minute.

The regal Duchess of Cambridge stood in for Prince Charles at a private dinner in aid of of one his favorite charities, In Kind Direct, which “redistributes surplus goods from manufacturers and retailers to UK charities working at home and abroad,” according to Clarence House.

Shining in a pale empire-waist gown with glittering silver straps and showing off her now-rarely exposed shoulders, Kate stepped in when her father-in-law was called away to give his condolences to the Saudi royal family following the death of their Crown Prince.

“The Duchess of Cambridge was delighted to be able to step in for her father-in-law, The Prince of Wales, to celebrate the work of In Kind Direct at the dinner,” said a spokesperson for St. James Palace.

“The Duchess had a little bit of time beforehand to prepare for the engagement — it all went very well.”

“She was so pleased that her first solo engagement was for The Prince of Wales, who has shown her so much support over the years.”

Robin Boles, the chief executive of the charity founded by Prince Charles in 1996, added, “This event was a unique opportunity for In Kind Direct to thank generous supporters who have helped us over the years to deliver so much benefit for UK charities and the millions of people they serve.”

“We were delighted that The Duchess was able to step in at such short notice after our founder was unexpectedly called away.”

“The Duchess hosted a very special evening with absolute professionalism and charm.”

Kate’s husband Prince William was unable to attend as he was on duty as a rescue helicopter pilot with the Royal Air Force.