Prince Harry buys his basics the American way — at Walmart. 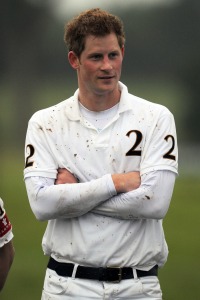 There’s no denying that Prince Harry‘s just a regular guy, despite the fact that he is the third in line to the throne. Prince William‘s little brother was spotted shopping at a Walmart in El Centro, California picking up a few basics — including Coke, pizza, bananas and beer. With that kind of shopping list, you would think he was a college student and not a potential King of England.

Eyewitnesses also say that his Walmart shopping trip isn’t the only less-than-royal act he’s been caught doing. Apparently, the Prince has also been eating street vendor food and waiting in customer lines like everyone else.

After a late night of bar-hopping, the Prince, who is known as “Captain Wales” among his fellow soldiers, along with a few friends ate tacos from a food stand outside a bar in Del Mar, California. Us Weekly reports that he also ate bacon and eggs at Pipes Cafe in Cardiff-by-the-Sea. A source tells the magazine that his tab was $6.45 and that “he stood in line like everyone else.”

It seems as if the 27-year-old royal is really enjoying his time in America. He is currently on a three-month Stateside stint for helicopter training with the British Military. He is currently training to fly Apache helicopters in the desert near the Mexican border along with 20 other students. His training will also culminate at an Air Force station in Gila Bend, Arizona, where they’ll fire missiles, rockets and cannons from the Apache helicopters.

Prince Harry isn’t the only royal to visit America this year, though. Prince William and Kate Middleton visited California earlier this summer, although their trip consisted more of fancy dinners, a polo tournament and rubbing elbows with a few Hollywood celebrities. While Kate loves to wear the same dress twice, there were no reports of Walmart visits during her North American tour. Now that would have caused an international crisis for fashionistas, for sure.