It looks like Tiger Woods’ number one mistress is about to become a mother. 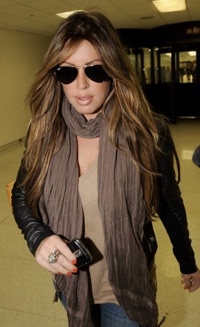 Rachel Uchitel, who made headlines just two years ago for being Tiger Woods‘ “other woman,” is expecting a baby, according to Life & Style Weekly.

Uchitel, who also tied the knot with insurance broker Matt Hahn earlier this month in Las Vegas, was apparently auditioning for a reality show when she found out she was expecting.

An insider tells the mag, “She found out she was pregnant when she auditioned for The Amazing Race. They were going to try out to be a couple on the show, and when she had a drug test, it came back positive that she’s pregnant.”

The insider also adds that the couple plan on getting married again in a more lavish ceremony, but after the baby is born.

Uchitel, who used to work as a nightclub hostess, first came into the spotlight after Tiger Woods’ infamous car crash in 2009, which came after a fight allegedly caused by Tiger receiving sexy texts from his mistress. She was also the “other woman” in actor David Boreanaz’s extra marital affair, to which he admitted. Uchitel has also been linked to other Hollywood stars including Derek Jeter, Alex Rodriguez and Ryan Seacrest.

It has also been reported that Uchitel was paid a cool $10 million to keep quiet about her affair with the legendary golfer. Uchitel has since not uttered a word.

Uchitel and Hahn met in November 2010 and lived in New York City before relocating to San Francisco. No due date has been announced yet.