Former Playboy Playmate Kendra Wilkinson would not forgive her hubby for straying — but that’s exactly what she did to Hef. 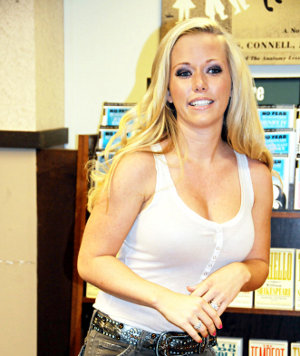 Yet, cheating is exactly what she has admitted to doing to former beau Hugh Hefner. Wilkinson’s relationship with Hefner and his two other girlfriends was depicted on Girls Next Door.

OK, so there are conditions when cheating is permissible? Wilkinson’s rep did not reply to a query for an explanation from SheKnows.

As for how Wilkinson feels about cheating now, she seems to have it thought it out pretty well.

It’s all about the mind.

“Cheating starts with the mind, it doesn’t start with the penis. I one hundred percent believe that,” said Wilkinson, who appeared on Dancing with the Stars in the spring. “It can depend on whether you have an open relationship and if your partner says it’s OK and they know you are flirting with other people and they are OK with it, that’s different. But if you are going into a relationship one-on-one and you go off flirting then that is cheating for me.”

Kendra is in its fourth season on E!