How did The X Factor judge Simon Cowell think his contestants did on the first live show on Tuesday night? 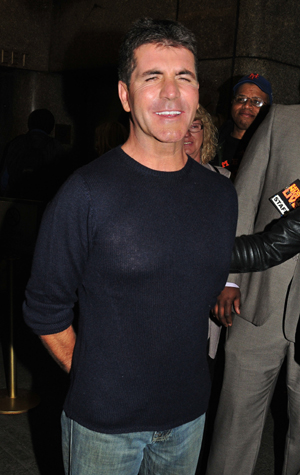 The X Factor had its first live show on Tuesday night and they pitted Simon Cowell’s team, The Girls, against L.A. Reid’s team, The Boys. Cowell is wasting no time in gloating over his team which he says is sure to create a superstar.

“I was happy with the show and… more happy that my contestants just killed everyone else’s” he told Access Hollywood. “I’m so doing better, I’m thrilled… my artists are better.”

“L.A. Reid doesn’t want to sit on this live show and see me do better than him, which I plainly did tonight,” he boasted.

Judge Paula Abdul has The Groups, which consists of InTENsity, Lakoda Rayne and The Stereo Hogzz, while Nicole Scherzinger has The Over 30s, consisting of LeRoy Bell, Stacy Francis and Josh Krajcik.

Cowell said he is confident that The X Factor will find stars. “I’m excited. I can see stars emerging here — artists that are going to sell records in the real world, that was the job,” he said.

Abdul agrees, saying “I can only dream that we have the same level of success [as American Idol]… I’m just happy, I’m very blessed… mentoring is my strongest suit,” she said.

Abdul and Cowell were, of course, American Idol judges together and enjoyed bantering back and forth — and this show is no different. After Cowell complimented Abdul on “the incredible job” she has done with her groups, she said the compliment was unexpected. “It was a little weird! It will only happen once, I’m certain. Might as well enjoy it if it’s short-lived!”

The X Factor next airs on Nov. 2 on Fox.