Oscar buzz is already surrounding George Clooney for his roles in The Ides of March and The Descendants, whether he’s willing to listen or not! 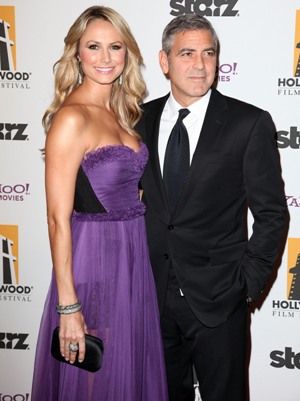 George Clooney already has an Academy Award to his name, but that doesn’t mean the actor is comfortable hearing his name and ‘Oscar’ tossed about together.

“I don’t pay attention to that,” George Clooney told the press while promoting The Ides of March and The Descendants in London.

“I’ve been on both sides of that equation a few times now, and what I have learnt about it is whenever someone says that, they’re complimenting the work and for that you say ‘thank you,'” said Clooney, seen here with new flame Stacy Keibler on Oct. 24. “It’s a very nice thing to say. It’s the result of a lot of people doing a lot of hard work.”

Continuing on the subject of winning awards, George Clooney shared, “I don’t remember who wins awards. I’ve won one, or a few, but what I remember are movies.”

The 50-year-old, who won Best Supporting Actor honors for his role in 2005’s Syriana, continued, “I really love movies. I remember 1976 [at the Oscars] was Taxi Driver, All The President’s Men, Network, Bound for Glory, and Rocky. I love those movies, and I watch films like that. I love films.”

Speaking of electing to take on a directorial role in The Ides of March, George Clooney explained, “You want to be able to be creative in this industry. Whether you’re interested in directing or writing, it’s an incredibly creative process. Acting is one element in a film, and directing is sort of painting, using all of those elements like sound, music and camera-work. Putting it all together is really creative, fun and exciting. I like the risks involved when doing that.”

Do you anticipate George Clooney will receive an Oscar nomination or two next year?