Bruce Willis and his much younger wife are expecting their first child together. 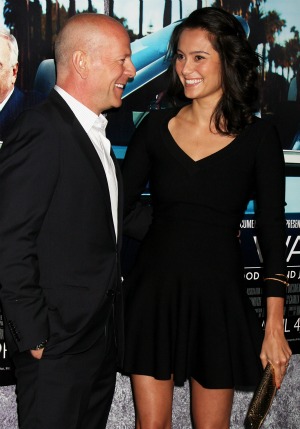 It’s back to diaper duty for Bruce Willis! The 56-year-old actor is expecting a baby with his second wife Emma Heming, who is 21 years his junior.

Willis, who already has three daughters — Rumer, Scout and Tallulah — with his ex-wife Demi Moore, and his 35-year-old wife Heming “are overjoyed with this news and they look forward to welcoming this newest addition into their family,” confirmed the actor’s rep.

Willis married Heming, a British model, at his home in Turks and Caicos in 2009. The tropical wedding was a true family affair, with guests including his three daughters, as well as Demi Moore and Ashton Kutcher. They followed up with a civil ceremony in California.

The star of The Expendables was married to Demi Moore for 13 years before splitting in 2000. Moore may be on the verge of another split — this time from Ashton Kutcher, who is rumored to have cheated on Moore with party girl Sara Leal on their wedding anniversary.

Willis must be preparing for the huge tab that comes along with a new baby. He is hard at work prepping no less than eight movies through 2012 and 2013: Fire with Fire, Lay the Favorite, Moonrise Kingdom, Looper, G.I. Joe 2: Retaliation, The Expendables 2, Kane & Lynch and A Good Day to Die Hard — the follow-up to his wildly successful action series, Die Hard.

Read on for more Bruce Willis

Arnold Schwarzenegger and Bruce Willis in The Expendables 2