Eddie Murphy just landed a huge gig hosting the Oscars, but he says his first love is still stand-up. The comedian talks to Rolling Stone. 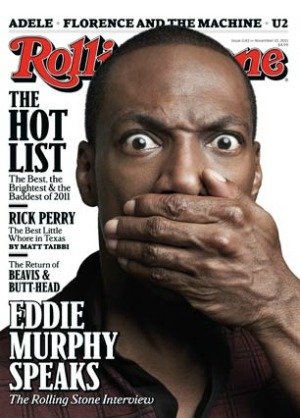 In recent years, Eddie Murphy has become best known for more family-friendly fare like The Nutty Professor and Dr. Doolittle, but the actor rose to fame with decidedly more adult material — and he tells Rolling Stone he may just return to those roots.

“If I ever get back onstage, I’m going to have a really great show for you all. An hour and a half of stand-up and about 40 minutes of my [expletive] band,” Murphy, who is hosting this year’s Oscars, told the magazine. “But I haven’t done it since I was 27, so why [expletive] with it? But that’s just weighing both sides. It comes up too much for me to not do it again. It’s like, when it hits me, I’ll do it, eventually.”

Just don’t look for him in any more kids movies.

“I don’t have any interest in that right now,” Murphy said. “There’s really no blueprint, but I’m trying to do some edgy stuff. And I only want to do what I really want to do, otherwise I’m content to sit here and play my guitar all day. I always tell people now that I’m a semi-retired gentleman of leisure, and occasionally I’ll go do some work to break the boredom up.”

Murphy also says that while we won’t see Beverly Hills Cop 4 hit the big screen, he’s got something up his sleeve for network TV.

“They’re not doing it. What I’m trying to do now is produce a TV show starring Axel Foley’s son, and Axel is the chief of police now in Detroit, I’d do the pilot, show up here and there,” Murphy said. “None of the movie scripts were right; it was trying to force the premise. If you have to force something, you shouldn’t be doing it. It was always a rehash of the old thing. It was always wrong.”

Read the complete interview in the November issue of Rolling Stone. You can also catch Eddie Murphy in the new movie Tower Heist starring Ben Stiller.