Aerosmith’s leader singer Steven Tyler is blaming food poisoning for the nasty fall that busted his teeth and caused a concert cancellation in Paraguay. 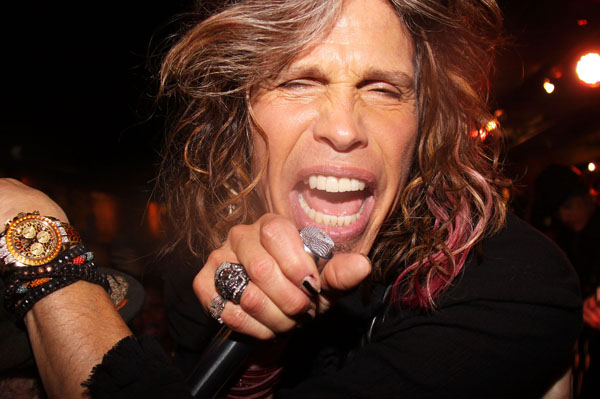 “Steven Tyler suffered minor injuries as a result of food poisoning,” Tyler‘s rep., Eric Sherman, said in a statement. “He was taken to the hospital where he was treated and released.”

He reportedly damaged two teeth and received several cuts in the fall. The returning American Idol judge went to see a dentist who said he was “delightful” while at his office. However, the dentist couldn’t save the Aerosmith concert planned for Tuesday night. The show was moved to Wednesday to give the singer time to recover.

“Steven would like to sincerely apologize to his fans in Paraguay for the inconvenience and hopes to see them all [Wednesday] night,” Sherman said.

Tyler last suffered a major concert-related injury during a performance at the Sturgis Motorcycle Rally in South Dakota in 2009. He entered rehab later that year to deal with a painkiller addiction.

Did a relapse have something to do with Tyler’s fall? No, but the big-mouthed singer hasn’t been shy when talking about his decades-long battle with drugs and alcohol.

“I blew 20 million. I snorted my Porsche, I snorted my plane, I snorted my house in that din of drugs and booze and being lost. I kept my medicine cabinet on stage, in a 14-inch drum head, the bottom of which contained… one Dixie cup (paper cup) with a straw and blow (cocaine) in it and the other with Coca-Cola and Jack Daniels in it,” he wrote in his autobiography.

These days, Tyler says his stint on American Idol is the only high he needs.

“If you think going out in front of high-def cameras and millions of people I’m not high on adrenaline, you’re crazy,” the 63-year-old rock star told People in April. “I’m stoned when that curtain drops.”

“I just don’t snort the curtain dropping. I don’t snort J. Lo either, though I do breathe her in,” he added.

Well, it’s safe to assume snorting in Jennifer Lopez‘s scent is much better for him than cocaine.

Read on for more Steven Tyler