James Van Der Beek and his wife revealed that they’re going to have another baby to join their one-year-old daughter. 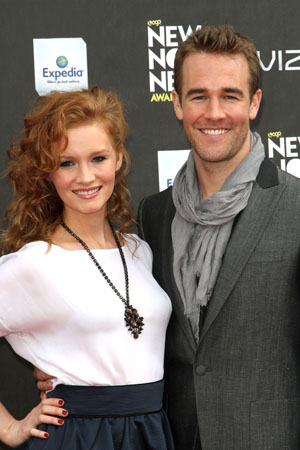 Former Dawson’s Creek actor James Van Der Beek is going to be a father for a second time! The actor confirmed his wife’s pregnancy in a tweet late Tuesday night.

“Just when we thought we couldn’t feel any more blessed, it seems the universe has plans to give our daughter a sibling… #humbled,” he wrote. Van Der Beek, 34, married second wife Kimberly Brook in 2010. She later gave birth to the couple’s daughter, Olivia, on Sept. 25, 2010.

“It’s changed the trajectory of my life. I feel like before my daughter, my priorities were arranged like a stormy sea — spread out everywhere; different ones popping up at random,” he told People earlier this summer of his new outlook on life as a father.

“And I was just floating along in the middle of it all. The minute my daughter arrived, everything instantly got rearranged like a pyramid, with my daughter and wife at the top, and everything else existing to support that.”

Before, his career and friends took center stage. Now, socializing only comes when there’s time between family and work duties — and he’s busy these days, thanks to his upcoming ABC pilot Apartment 23.

“My wife and daughter get first priority, and then I’ve also got some great friends who I still try to meet up with as often as I can,” he said.

No word yet on when baby Van Der Beek is expected to make his or her debut.

Congratulations to James Van Der Beek and his family!