Dancing with the Stars paid tribute to the “Great White Way” this week, but it was the final number for Chaz Bono. 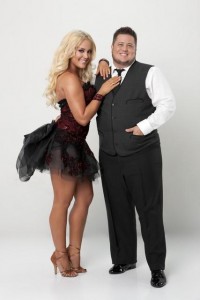 It was Broadway week on Dancing with the Stars, but for one contestant, their jazz hands were lowered and the race for the mirrorball is over — and that contestant is Chaz Bono.

Season 13 of Dancing with the Stars might be over for Chaz Bono, the man who created quite a stir when the season began, but his time on the show will always be remembered.

Here’s how the results went down…

The first couple of the night that was safe was J.R. Martinez and Karina Smirnoff, followed by Ricki Lake and Derek Hough and then Nancy Grace and Tristan MacManus.

The next lucky contestants saved to dance another day were David Arquette and Kym Johnson and Rob Kardashian and Cheryl Burke.

Hope Solo and Maks Chmerkovskiy were sent back to safety, leaving the sixth couple to leave the ballroom Chaz Bono and Lacey Scwhimmer.

The competition is getting tense and after seeing both Chaz Bono and Maks Chmerkovskiy lose their cool this week, we have a feeling it’s only going to get more emotional.

Chaz took aim at Bruno Tonioli for the judge’s constant references to Chaz and his weight (penguins and Ewoks are just a few comparisons that have been made), while Maks took a shot at Len Goodman after the judges weren’t so hot for Hope Solo’s rumba.

We want to hear from you — did Chaz and Maks take it too personally or were they justified?

Head over to our comments section and tell us — what did you think of this week’s Dancing with the Stars elimination?

Next week is Halloween week!