The Conrad Murray trial continues, as a nurse testified today that Michael Jackson begged her for sleep aids and fired her for refusing him. 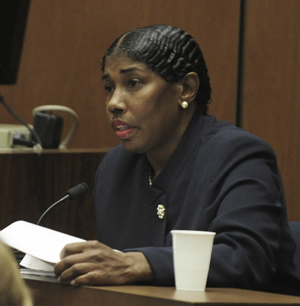 Conrad Murray’s defense team called nurse Cherilyn Lee to the stand today and jurors heard her talking about her employment with Michael Jackson. She said that two months before he died, Jackson “begged” to be given the anesthetic propofol to help him sleep and he dismissed her when she refused.

She recalls the events taking place April 2009 and Jackson asked for propofol by its brand name, Diprivan. “He looked at me and said: ‘What I need is something that’s going to help me fall asleep right away, (and) the only thing that will help me do that is Diprivan,'” she told the jurors. She said she told him her concerns about doing that, and he said, “‘No, I just need somebody to come here, and I will be safe. If it was monitored. As long as I’m being monitored,'” she remembered him saying.

Lee said that Jackson was “upset” he couldn’t sleep and said that he had received propofol in a surgery and it helped him sleep.

She recalled him saying, “I’d fallen asleep so easily, and I wanted to have that experience again. I want to be able to fall asleep easily so that I can get enough rest, because I’m in the midst of doing a lot of work right now. I know this will knock me out as soon as it gets into my vein.”

She said that she refused to give it to him and Jackson did not ask her back, even though she had been treating him in the past.

The prosecutors turned her testimony around and said that she wouldn’t do it because it “could kill him,” however Murray, who Jackson was paying $150,000 per month to be his personal physician, would do it.

Murray is currently facing involuntary manslaughter charges for the death of Michael Jackson and could spend four years in jail.