Andy Rooney was admitted to the hospital in stable condition after suffering complications from surgery he underwent last week. 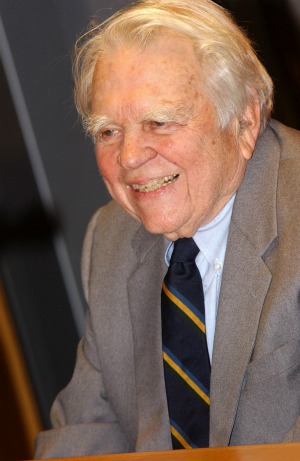 Beloved veteran CBS news correspondent Andy Rooney was admitted to the hospital in stable condition for complications after surgery.

According to an announcement by CBS News, the 92-year-old Rooney “suffered serious complications” from minor surgery he had last week.

The network did not disclose the type of surgery or the nature of the complications.

He delivered his last essay on 60 Minutes three weeks ago, after 33 years. It was Rooney’s 1,097th commentary.

Rooney joined CBS in 1949, as a writer for the show Arthur Godfrey’s Talent Scouts. The program was a hit, reaching the number one position in the ratings in 1951.

Rooney wrote his first television essay in 1964, called “An Essay on Doors.” His famous end-of-show essay, “A Few Minutes With Andy Rooney” on 60 Minutes, began in 1978.

Rooney is best known for a 1990 commentary that had him suspended from the show for three months, saying that, “Too much alcohol, too much food, drugs, homosexual unions, cigarettes [are] all known to lead to premature death.” He later expressed his remorse by saying, “There was never a writer who didn’t hope that in some small way he was doing good with the words he put down on paper and, while I know it’s presumptuous, I’ve always had in my mind that I was doing some little bit of good. Now, I was to be known for having done, not good, but bad. I’d be known for the rest of my life as a racist bigot and as someone who had made life a little more difficult for homosexuals. I felt terrible about that and I’ve learned a lot.”

He later came under fire for comments made after Nirvana singer Kurt Cobain committed suicide. In a string of comments about the singer, he stated, “If [Cobain] applied the same brain to his music that he applied to his drug-infested life, it’s reasonable to think that his music may not have made much sense either.”