Big Bang Theory star Kaley Cuoco has announced that she is engaged to Josh “Lazie” Resnik. 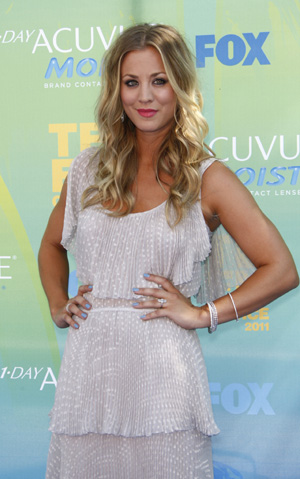 The Big Bang Theory star Kaley Cuoco is engaged to addiction specialist Josh “Lazie” Resnik. The couple has yet to set a wedding date, however it sounds like they are excited to move into this new chapter of their life.

“The surprise proposal took place during a quiet date night at home,” their rep says. “The couple is very happy and excited to begin planning their wedding.”

Not much is known about her new fiancée — and that seems to be the way Cuoco likes it. In fact, she dated her Big Bang Theory co-star Johnny Galecki for two years under the radar! “It was such a huge part of my life and no one knew about it,” she told CBS Watch Magazine. “It was a wonderful relationship, but we never spoke a word about it and never went anywhere together.”

She admitted that keeping the relationship secret was difficult. “We were so protective of ourselves and the show and didn’t want anything to ruin that. But that also made it sad, too. That’s not the kind of relationship I want — I don’t want to be hiding.”

This isn’t Cuoco’s first engagement — or is it? The actress joked on the red carpet of the Golden Globes that she was engaged and showed off a huge diamond ring on her ring finger. “I’d like you to know who I’m engaged to — Chopard, the jewelry designer,” she announced. She said she wore the borrowed ring on her ring finger because that is the finger it fit best on.

“Thanks to everyone’s well wishes! So sweet and means a lot to us! #ecstatic,” the 25-year-old actress tweeted today.