Brandi Glanville was spotted at a pumpkin patch with a hot young thing. Eddie who? 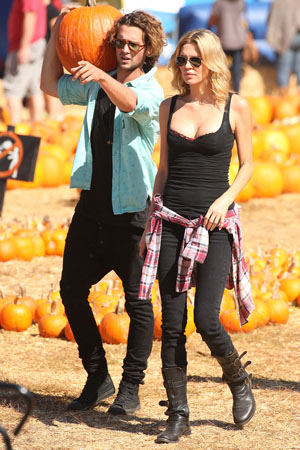 Eddie Cibrian left Real Housewives of Beverly Hills star Brandi Glanville for a much younger woman, so why shouldn’t she do the same? Well, she did.

Glanville, 38, was spotted over the weekend at Mr. Bones Pumpkin Patch with 22-year-old actor Spencer Falls. Spencer, who? We thought the same thing, until we figured out he’s half of the made-up Virgin Mobile super couple, Sparah. (You might remember the commercials that made fun of celebrity super couples like Heidi Montag and Spencer Pratt.)

The duo made like Courtney Stodden and Doug Hutchison with their PDA-packed visit to the petting zoo and pumpkin patch. They later sped off in her Range Rover with their giant pumpkins, only to check in later at the Mondarian Hotel.

It must have been Cibrian’s weekend with their two children, Mason and Jake. The two share custody, even if the situation isn’t to Glanville’s liking. She told Wendy Williams that she finds Cibrian’s new wife, LeAnn Rimes, “overbearing” and described how she first found out about their relationship.

“He said there’s a magazine cover out today that says I might be having an affair with LeAnn,” Glanville told the talk show host. “We were leaving that day for my best friend’s wedding. We went to the wedding had a great time, and when we got home…”

However, the two have called somewhat of a truce since their tabloid fighting days. Glanville still isn’t that pleased with Rimes, though.

“When she has a child of her own, she’ll understand how a lot of the things she says and does regarding my children can be construed as really inappropriate,” the new RHOBH star added.

The one thing she didn’t dish about: her new boy toy.

“I’m a single mom I do my best,” Glanville tweeted last week. “I try really hard and think I’m raising 2 amazing little men! Boys will always be boys tho!”

Do you think Brandi Glanville should date someone so much younger?

Read on for more Brandi Glanville