Robin Williams and his new wife are packing in a lot of love during their honeymoon in Paris. Get a room, lovebirds!

Is Robin Williams’ third marriage the charm? It looks like it, judging from the couple’s PDA-filled trek to their honeymoon destination of Paris. The couple — married over the weekend at the Meadowood Resort in Napa Valley — has been spotted all over the City of Light. 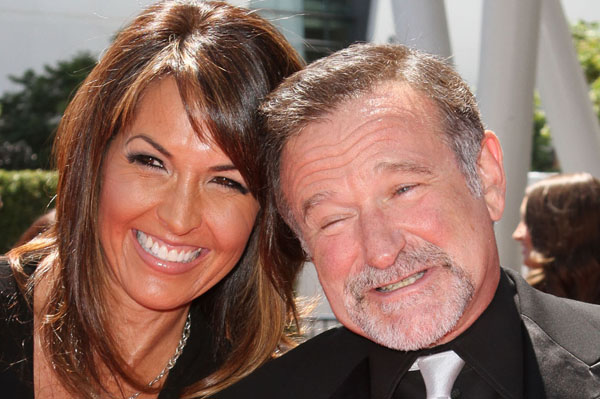 Well, more like making out all over the City of Light.

The 60-year-old star of Happy Feet looks like a teenager with his new wife, Susan Schneider. The couple spent much of Tuesday taking in the sights and speaking to locals in fluent French, according to the U.K. Daily Mail.

“After leaving their hotel near the Champs Elysees they stopped off for lunch at the Imperial restaurant,” the newspaper reported. “The newlyweds then took a romantic stroll on Vendome Place before Susan dragged Robin into a Christian Dior shop.”

They even took the time to pose with a fan.

Williams met his new wife in 2009 while he was recuperating from heart surgery. He’s been married twice before. Despite his new wife, Williams has always said his biggest loves are his children.

“It’s like living with Mensa,” Williams told Movieline in 2007 of his younger son, Cody. “He’s reading Flaubert. Everything is like, ‘Oh my God.’ And he has these debates about totally ridiculous subjects. He brought home a couch that he found on the street and we said, ‘You can’t, man. It’s full of…’ ‘No, but it’ll be great.’ ‘It will be great when all the creatures come out too. It’ll be like Planet Earth but in your bedroom.’ Then he said, ‘We’ll have to fumigate it.’ ‘Oh, like fumigate it. Put it in a bag and just dust the thing with chemicals that could kill things for the rest of the year.’ And it was interesting to have this debate and he was just debating because he could, just to piss me off. But that’s his job.”

His two older children — Zelda and Zachary — are both into acting.

“I thought, ‘Why? You have a degree in Linguistics. Why do you want to do that?'” he said of his son’s acting ambitions. “But he found he wanted to do it and I went, ‘Okay, dude.’ It’s always things that for me are really interesting at this point in my life. For me, it’s great. Much more expensive than sea monkeys but you get to see amazing progress and see them grow and that for me is astonishing. And see them do things that you’re going, ‘Good luck.’ And I try and tell them the traps but they’ll learn them on their own.”

It sounds like Williams now has his perfect little family all together now.

Do you think Robin Williams is finally happy with his third wife?