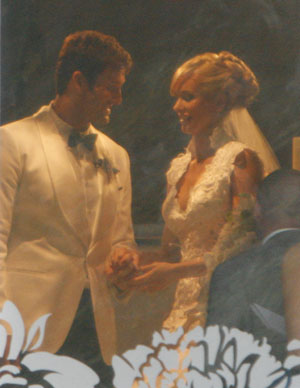 Jessica Simpson may — or may not — be pregnant, but we have no doubt about her ex-boyfriend Tony Romo’s fatherhood status: He confirmed his wife is pregnant! Romo, 31, and his new wife, Candace Crawford, are expecting their first child together — and he revealed the news in a completely adorable way.

The Dallas Cowboys quarterback was at an appearance at Cedar Hill High School near the city when a student asked him if he had any children.

“Um, no, I don’t have any kids,” Romo replied, adding, “I’ve actually got one on the way. My wife’s pregnant.” The students cheered and clapped at the announcement. “It’ll be fun,” Romo said, throwing up his fist.

Romo and Crawford — sister of Gossip Girl star Chase Crawford — married in Dallas on May 28. “It was perfect,” a source told People about the wedding. “From the ceremony… to a vibrant after-party and great music selected by Tony himself.”

The duo started dating in 2009, shortly after Romo broke off his two-year relationship with Simpson. “She is heartbroken,” a source said of Simpson after their breakup. “She loves Tony. But it’s been difficult lately. He’s busy with his career and she’s getting ready to shoot her show (The Price of Beauty). They decided to part ways.”

She alluded to the break-up in a tweet at the time, “Everyone needs to know that hope floats… grab the strings and pull it back to you.”

Now, Romo is happy with new family and Simpson is engaged to football player Eric Johnson and is (likely) starting a family with him, too.

It looks like their hope came back to them, just separately.