Jessica Simpson is in New York City with her little sister Ashlee — and her suspiciously growing belly. See the photo of her maybe baby bump. 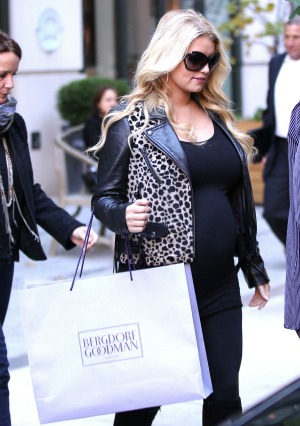 Is she or isn’t she? That’s the question on everyone’s lips when trying to figure out if Jessica Simpson is pregnant. By the look of her in New York City yesterday, though, the answer seems crystal clear: yes!

Simpson spent the day shopping with her sister Ashlee Simpson at upscale Bergdorf Goodman’s located next to The Plaza Hotel on Central Park, and the photos snapped by street paparazzi show what definitely cannot be confused with a stomach caused by too many cookies. That definitely looks like a baby bump!

Jessica Simpson dishes on her fiancé >>

So why won’t Simpson let us in on her glaringly obvious “secret,” yet? As SheKnows reported earlier, the Simpson camp is trying to secure a $500,000 payday for rights to the big announcement. Problem? No one is buying.

Now her tummy is doing the talking for her. How much longer can Simpson go without making an official statement — paid or unpaid?

Jessica Simpson is engaged to former football player and assumed baby daddy Eric Johnson. The two announced that special engagement news last November but have not yet set a wedding date, leading to further speculation on the contents of Simpson’s womb: Does she want to wait until she gets her post-baby body back to fit into a wedding dress?

Does Jessica Simpson have cold feet?

Jessica Simpson is keeping her “boobies”