Ethan Hunt has gone rogue. In the latest poster for 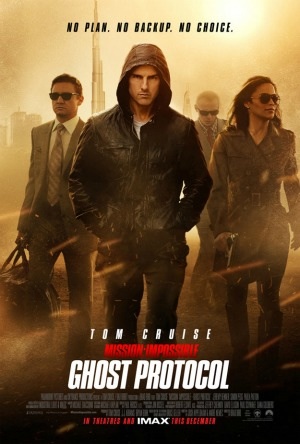 In Ghost Protocol, Ethan Hunt (Cruise) has once again found himself in an impossible situation. The Impossible Missions Force (IMF) has been shut down and is implicated in a global terrorist bombing. With the government watching their every move, Hunt and his team of agents are chosen to clear the company’s name. Their mission, if they choose to accept it, is called “Ghost Protocol.”

Ghost Protocol has been described as the most dangerous installment of the Mission Impossible series. The agents have no plan, no backup and no choice but to clear IMF’s name. From a production standpoint, the film is supposed to be a farewell vehicle for Cruise’s character. There have been rumors that Jeremy Renner’s character, Brandt, will takeover as the lead for future Mission Impossible sequels.

Judging from this poster (which debuted on Yahoo Movies), Ethan Hunt and Brandt are like night and day. Hunt’s known for getting his hands dirty, while Brandt looks more straight-laced. In the Ghost Protocol trailer, the men clearly don’t trust each other, which could be a serious problem down the line.

Mission Impossible – Ghost Protocol opens in IMAX theaters Dec. 16, which will include a special six-minute prologue from The Dark Knight Rises. It arrives in conventional theaters five days later on Dec. 21.