Jennifer Aniston says there’s no truth to the rumors that she’s ready to tie the knot or have a baby. 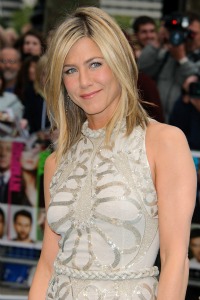 It seems like the celebrity world would love to see Jennifer Aniston finally settle down and have a baby, but the former Friends actress says that’s not happening — at least not yet. Amidst rumors that Aniston has been sporting a bit of a rounder belly these days, the actress says there’s no baby growing in there yet and that she’s simply just gained weight.

Aniston, who has been dating actor and screenwriter Justin Theroux for a few good months now, tells Britain’s Hello! magazine, “No, we’re not pregnant. It’s just I quit smoking, so I’ve gained a couple of pounds.”

It looks like body-conscious Aniston, who famously said she and Friends co-star Courtney Cox-Arquette “ate salads every day for ten years” while filming the hit NBC comedy sitcom, has finally kicked her bad chain-smoking habit to the curb for the sake of her health.

She also insisted that while she and Theroux are very happy together, they have no plans to tie the knot. She said, “I’ve been married once, and I don’t know if I’ll get married again. But I can tell you that as of this very moment, I have no plans to get married. Got that?”

Well, that’s one thing both she and ex-husband Brad Pitt seem to be on the same page about. Pitt also recently revealed that he’s not ready to settle down with long term partner Angelina Jolie until same-sex marriage is legalized in all fifty states of the country. Perhaps if Aniston and Pitt did remarry their respective partners, we could finally put this three-way love triangle between them and Jolie to rest.

14 hrs ago
by Scarlett Harris