Jay Leno gave a tongue-in-cheek send-off to motorcyclists at the annual Love Ride — only to have it end tragically. 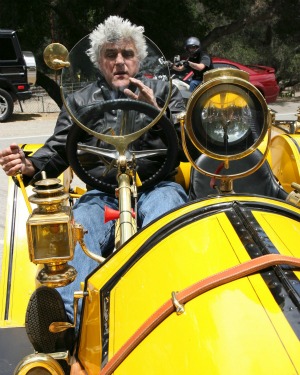 A charity motorcycle ride ended in tragedy Sunday when two participants were run over by a truck — and now Jay Leno is under fire for some unlucky jokes he made before the accident.

The Tonight Show host was grand marshal of the Love Ride, a charity tour to raise money for Autism Speaks. In his opening remarks, Leno made a distasteful joke.

“I want to see somebody go down. So it’ll be fun. I want it to be in front or behind me and see a whole row of bikes go down.”

“Get drunk, fall off the road. We’ve all become too d*mn polite… We haven’t had one incident.”

While his comments may have seemed all in good fun at the time, no one was laughing when shortly after two riders did go down — and were run over by a big rig truck.

Romarino Zeri and Julie Cameron collided with the truck while they were riding between lanes, which is a legal maneuver in California. The rear tires of the truck ran over both riders, who were pronounced dead at the scene.

While it seems easy to point the finger at Leno for being tasteless after the fact, some riders were not happy with his “joke” even before the accident occurred.

“I wish he had not joked about that, if someone does go down, he is going to feel really bad for his comments,” one attendee said immediately afterward.

That wasn’t the only crash that day. Leno himself accompanied another rider to the hospital after an unrelated crash.

“We, along with our family of riders, mourn the loss of our friends, Romarino Zeri and his passenger, Julie Cameron,” said event organizer Oliver Shokouh on the Love Ride website.

“Our heartfelt condolences and sympathies go to their families and friends… Together we will honor our fallen.”

Leno himself has not spoken publicly about the incident.