Alexis Stewart appeared on The Today Show recently to promote her “tell-all” book about her mother, Martha Stewart. The interview went from cold to awkward as the conversation turned from Whateverland to Alexis’ co-author and former best friend. Watch!

Alexis Stewart‘s The Today Show appearance on Monday went from bad to worse as the conversation oscillated between her Whateverland book about Martha Stewart, to her falling out with co-author Jennifer Koppleman-Hutt. 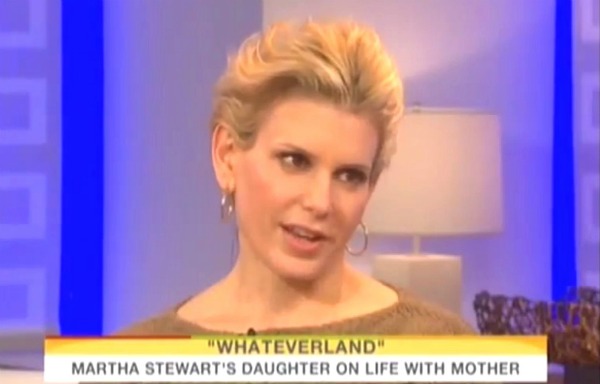 “It’s supposed to be funny,” Alexis Stewart tried to explain of her book while appearing on The Today Show, seated next to her ex-best friend (also former radio show partner of five years and co-author of Whateverland). “It’s not a book about my mother,” she insisted. “It’s a book about growing up and learning to live with what happened or didn’t happen.” Alexis later added, “Everyone can make funny stories up about their families.”

Yet as much as the world doesn’t seem to be getting the joke about Whateverland, in which Alexis Stewart writes she was raised with “a glue gun pointed at my head” and no food readily available, it was talk of the failed friendship that put an icy chill in the room.

As the pair discussed their friendship “break-up,” the daughter of Martha Stewart shared, “If you want to punish somebody, never talking to them again is a really good method,” adding, “some people are very clingy and some people like to be by themselves.”

The two women, who created the Sirius radio show Whatever with Alexis and Jennifer, often poked fun at Martha Stewart and found success in a show called Whatever, Martha during which they made fun of Martha Stewart Living reruns.

Using the metaphor of a marriage for their friendship Alexis Stewart said, “One day you look at your husband and you’re like ‘oh — not anymore.'” To which Jennifer Koppelman-Hutt chimed in, “That’s how she looked at me!”

What do you think of Alexis Stewart’s The Today Show appearance?

Do you have any interest in reading Alexis Stewart’s Whateverland book?