Frank went postal on Lydia last week, throwing a bit of a wrench into Emily Thorne’s plans. What’s up next for Revenge? Your guess is as good as ours!

There’s bound to be fireworks when 4th of July hits the Hamptons on Revenge. 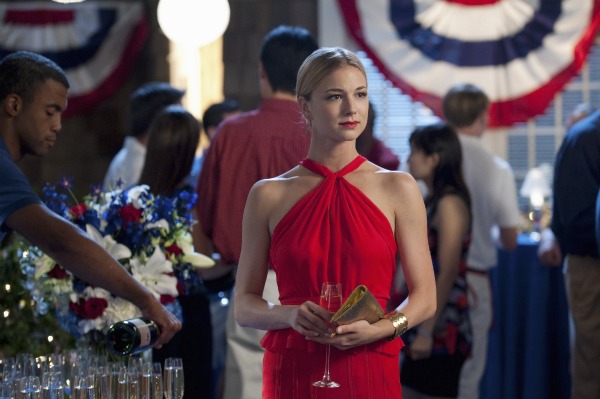 Revenge and Emily Thorne (Emily VanCamp) have continued to intrigue viewers, what with the show’s intricate plot and complicated characters, which makes this week’s episode perfectly dubbed “Intrigue.”

Last week, audiences were stunned as Lydia Davis was thrown from her rooftop by the Grayson’s head of security, Frank.

This threw Emily Thorne for a loop and there’s reason to believe she’ll now have to keep her eye out for the man.

This week on Revenge’s all-new episode “Intrigue,” it’s 4th of July and some interesting video footage comes to light, causing a wedge between Frank and the Grayson’s.

Elsewhere, Emily is still battling with frat boy Tyler, while she and Nolan deal with a new threat where Frank is concerned.

ABC’s Once Upon A Time nabs enchanted ratings >>

ABC‘s official release describes “Intrigue” as the following: “The Grayson 4th of July parties are legendary, but this year’s festivities ignite the wrong kind of fireworks when an incriminating surveillance video pops up and breaks the bond of trust between the Graysons and their head of security, Frank. Frank won’t go down without a fight, which will spell trouble for Nolan and Emily. Meanwhile, the tension between Emily and Tyler will come to a head, Daniel can’t seem to catch a break, and both of the Porter boys make bold moves to get their girl.”

Revenge was recently picked up for a full-season order, proving fans are enjoying the fresh take on the timeless idea of revenge.

Revenge might be complicated and at times mind blowing, but it’s done in such a way that fans can still follow what’s going on.

Have you been keeping up with Emily Thorne on Revenge?