Monday night’s Dancing with the Stars took an ugly turn when dance pro Maksim Chmerkovskiy stood up for not only his partner Hope Solo, but all the contestants. Read on to find out what he said to head judge Len Goodman that got the other judges fired up.

Dancing with the Stars pro Maksim Chmerkovskiy is known as the bad boy of the ballroom for his sharp tongue that always finds its way to the judges. He finally broke this season and it wasn’t pretty. 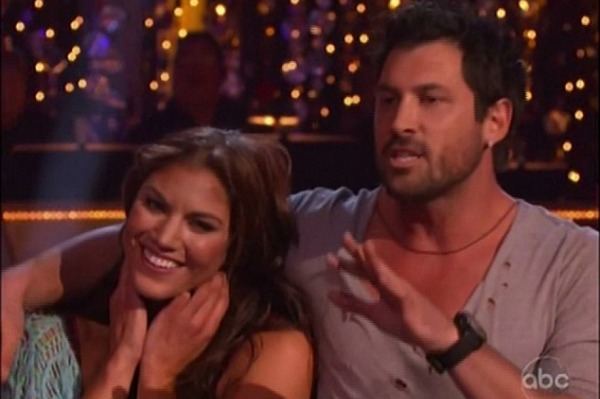 After dancing, what he thought, was a well-rehearsed rumba with partner Hope Solo, Chmerkovskiy found himself at odds with judges Len Goodman, Carrie Ann Inaba and Bruno Tonioli.

The exchange with Len Goodman that made him go bananas was after Len called the dance Hope Solo‘s “worst” of the season.

“Hope, I’ve never lost faith in you. I always feel like there is so much there, and for some reason it hasn’t come out,” Len Goodman said.

He added, “This is your worst dance of the season in my opinion.”

This did not sit well with Maksim Chmerkovskiy. After Chmerkovskiy declared he was tired of the judges “little” comments, Len had enough and said, “I’ve been in this business for 50 years,” to which Chmerkovskiy quickly replied, “Then maybe it’s time to go!”

This prompted Carrie Ann Inaba to take offense to the treatment of Len and of course, Bruno Tonioli tried to smooth things over.

Check out the exchange…

The arguing continued backstage as the heated dance pro told Brooke Burke Charvet, “With all due respect, this is my show. I help make it what it is.”

After sometime cooling down, The Hollywood Reporter is reporting Maksim Chmerkovskiy spoke backstage and this is what he had to say: “I pride myself on the fact that I’ve never changed. I think I got smarter… but the integrity is still there. I’m very clear in what I stand for.”

He added, “I feel like it’s my show, and together, with other pros, I dedicated six years of my life to this show. I’ve helped make it what it is, but I’ve never taken it away from anybody else who participated.”

He continued, “Like I said, it’s my show, and I didn’t mean it in a selfish way. I love it. It’s what I love doing. Our fans are phenomenal.”

What did you think of the exchange between Maksim Chmerkovskiy and the judges of Dancing with the Stars? Was it too much or right on?

Carson Kressley knew he was “toast”